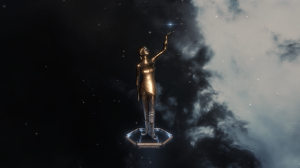 A full view of the monument. The star she holds looks like it could be a background star.

On February 20, YC 112, shortly after posting my survey of the Traumark Installation, I received a comment from another pilot. My explorations and reviews have never generated much in the way of comments, and while other writers may be disappointed by the lack of engagement, I was always content that what few comments I did seemed to be genuinely kind and positive comments. This particular one was no different, even if it was from a pilot I hadn’t encountered before. After finishing her remarks, she ended by noting, “We’re on similar missions. My goal is to explore all of the new planets. Good luck in your journey, fly safe.”. I’ve encountered pilots with that goal before, and those pilots generally tend to get daunted once they realize the sheer immensity of the task of visiting over 7,800 systems within and connecting to New Eden, so at the time I didn’t give it much thought. 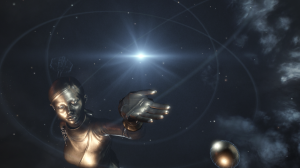 A closer look a the star system in Katia’s hand.

Though that was the first time I met Katia Sae, it wouldn’t be the last. She would pop up every now and then, always with generous praise of my various musings here, before moving on, while I quickly began watching her own progress once I found her site. Since then, we’ve interacted not just on our respective journals, but on the GalNet and elsewhere, and I’ve become much more comfortable with calling her not only a fellow pilot, not only a fellow explorer with a deep sense of wanderlust, but a friend. And now, some 7,806 systems later, with that friendship comes a deep sense of pride as well as Katia has now visited every system accessible in and to New Eden, including a much-coveted (by me, at least) visit to Polaris, a system within the generally inaccessible depths of what used to be Jove space. And she did it all without losing a single ship (a claim I certainly would not be able to get away with). 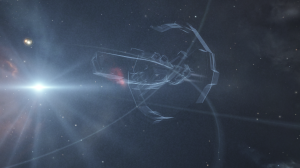 A closer view of the ghostly Astero that can be found hiding in the system.

I get the sense that Katia remains a little overawed by the response to her achievements. The end of her journey gained her attention not just within the fairly tight-knit exploration crowd, but well beyond. While it is perhaps not surprising that her own corporation, the ever-friendly Signal Cartel, took not a small amount of pride in her accomplishment, it is perhaps more surprising that Katia has captured the imagination of not just the capsuleer press and other writers, but broader news sites as well. All to celebrate what truly is a remarkable achievement. And that wasn’t the end of the celebrations for Katia, as the Achura Stargazers Society quickly announced that they would be erecting a permanent monument to her achievement next to the very first stargate she used in starting her journey, the gate to Abagawa in the system of Saisio.

Not one month later, the Society unveiled the likeness of Katia about 35 kilometers from that gate, saying the following: 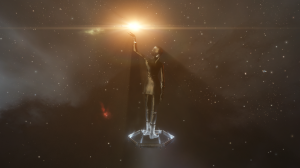 In the unending dark of space, there are a few bright lights to which we can reliably turn for guidance and inspiration. Katia Sae is one such beacon, a shining example of what we can all aspire towards. She exemplifies the attitude of a true explorer: friendly to all in her travels, neutral and never initiating aggression, and very, very hard to catch.

She began her quest to explore all of New Eden from Saisio III on December 1, YC111 and came full circle back to Saisio on March 9 of YC121 after having explored every known-space and wormhole system that can be reached – all without a single ship loss. 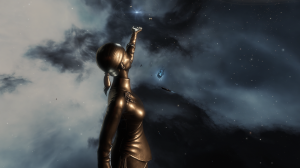 May Katia Sae’s epic journey be remembered forevermore by all who travel into the furthest reaches of New Eden and the fathomless depths of Anoikis. Every star is one of her footprints, and every heavenly body tells the tale: “Katia Sae was here.”

The Journey of Katia Sae Memorial,

raised by the Achura Stargazers Society,

in association with Signal Cartel. 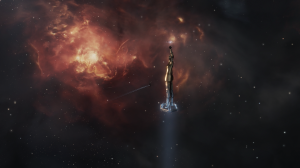 Going in for a look.

As expected, the statue is magnificent. A gargantuan Katia, who dwarfs my lowly Professor Science, is seen standing on a shimmering plinth reaching up to the stars, quite literally holding a star system in the palm of her hand. The details included on the statue are impressive. Individual strands of hair can be seen gathered behind her head in a utilitarian ponytail, along with creases in her pant legs and jacket. Her expression is one of a certain calm confidence, seemingly quite comfortable in knowing the limits of herself. The metal plating riveted together to form the statue might in other circumstances detract from the monument, but here adds a striking juxtaposition to the otherwise quite-real appearance. 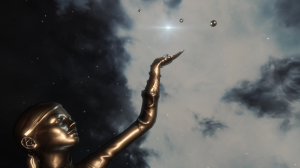 But, of course, what truly catches my eye is the system she holds in the palm of her hand. I can’t help but zoom in for a closer look at that orrery, and as my camera drones approach, my view becomes awash in holographic static. The central star is but a pinprick of sapphire light; even close up, I can’t see any features, though it throws Professor Science in sharp relief when I approach. Surrounding it are 3 planets in inclined orbits around the central orb. Although  supposedly metal in nature (metal that reflects the light of both their own sun and Saisio), their true nature is belied both by their ghostly orbital paths and the holographic grids that can be seen superimposed on the edges of the spheres, regardless of your viewpoint. 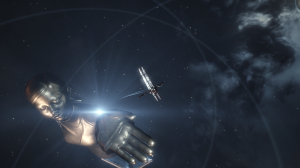 If that were all there was to the monument, I’d be satisfied but perhaps ready to move on. But in examining that star system, after just a few moments I caught a hint of movement. I at first thought it was just the movement of another ship at the site (I was by no means the only person there to inspect the monument, and CONCORD had made its presence known as well), but after casting around for a few moments for whatever movement caught my eye, I came across the spectral apparition of a half-cloaked Astero – Katia’s signature ship – also in orbit around the central star. The ship, ironically slightly large than an actual Astero, is a clever addition to the monument. 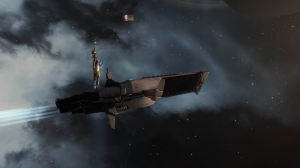 Off to the next adventure.

I’m, of course, incredibly happy for Katia and proud to have played some small role in her journeys. She’s certainly earned the adulations that she’s so far received. Exploration takes a certain type of personality, a certain amount of patience, and a whole lot of perseverance, all of which Katia has in spades. I can’t imagine having the dedication to see a project 10 years in the making all the way through to completion, so I must content myself to celebrate those who can. And now this monument stands as a testament not just to Katia’s achievement, but to that ineffable spirit of wanderlust that drove her.

This entry was posted on April 11, 2019 by mark726. It was filed under Hi Sec Sights and was tagged with The Forge.