A view of the failed advertising space

I twirled my hair nervously, looking around at the rather cramped confines of this “Buzzard”, as he called it. I was sitting on what used to be the bridge, surrounded by a whole bunch of panels that were flashing information that made little to no sense to me. I hadn’t heard from Mark for a while now, caught up in… well, whatever it was that he did while flying this oddly shaped ship. If the little map was any indication, we were almost 7 jumps out from Luminaire, where he had picked me up. It was creepy being the only person on this ship. Well, the only not melded in some unholy hybrid of man and machine and easily accessible to talk to. 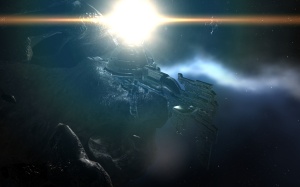 A close up of the standard Gallente outpost, constructed apparently by the Friends of Nature.

I jumped for a moment, before turning to see a semi-translucent hologram of Mark, standing by me as if nothing happened. He had changed his appearance significantly since he had left for that brainwashing camp known as the Center for Advanced Study. Gone were the flowing blue robes and long, stringy brown hair. He’d let his hair turn back to its natural reddish hue and cut it severely, and the holographic projectors gave it a rather tousled look. Given that he was always running his fingers through his hair (he got that from me), that didn’t surprise me.

Of course, I also knew that he currently had wires running out of the length of his entire body, as he floated in darkness in that… pod he seems so attached to. Just thinking about it gave me the shivers, so I shoved the thought out of my head.

“Don’t DO that, you know how it terrifies me.”

“I just thought you’d like to know that we’re almost there.”

With not even a blink, and showing far more control over this ship than felt natural, a zoomed in map popped up, clearly labeling the system Alsottobier.

Clearly for my benefit, he looked to the ceiling, and said simply, “Aura?” 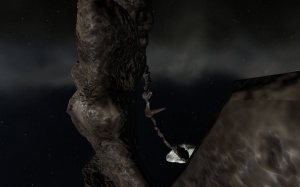 Arid Park was originally intended as a piece of corporate art displaying Quafe’s cultural superiority over its competitors and its general gravitas within the Gallente zeitgeist. After an intensive anti-commercialist public smear campaign by the FON [Friends of Nature], however, its construction was abandoned. Now, all that remains is a half-constructed skeleton of ugly rocks, something FON are quick to cite as metaphoric for the ugliness of the corporate soul. Opting to keep things in their unfinished state, they have turned the place into a broadcasting and information center.

A side profile of the Park, with Alsottobier I in the background.

As the voice was speaking, the ship shuddered a tad, which I recognized as the ship’s warp drive engaging. The screen that was previously a map showed a forward looking view. A bluish tunnel seemed to surround us as the system flashed by. Within seconds, the ship shuddered again and a quickly enlarging scene appeared on the screen: it seemed to be a whole bunch of rocks arranged in a rough cross, with each end apparently weighted with a larger asteroid. A variety of small craft surrounded it, as well as what appeared to the untrained eye to be a small station of some kind. I glanced over at Mark, who had a surprisingly excited look on his. I hadn’t seen that look since he was a child with a new toy.

“What exactly is this?”

“It’s Arid Park! Oh man, can’t you feel the history here? Do you realize how hard it is to take down Quafe? Even capsuleers can’t do that, and we’re more powerful than most of the empires! That must have been an amazing feeling!”

I looked back at the screen. Mark was apparently guiding the ship around the asteroids. We paused now and then as he looked at the site from various angles.

He looked away from the screen and back towards me for a moment. He started right back up again, even more excited.

A look inside the center of the crux

“But they’re more than that! These aren’t just any rocks. They’re part of a story. A story that needs to get told. A story about how the little guy can win, even if he’s only fighting with a slingshot against someone with tachyons. You CAN take down the big corporations. Not necessarily saying I want to, of course, but everyone needs to be taken down a notch every now and then, right? Think of how astounding it is that a small group of nature lovers stopped a full blown Quafe advertising campaign. And these rocks, right here, are part of it all. They’re part of history.” He spread his holographic arms out wide, as if trying to encompass the universe in his armspan. “This is what it’s about! Trying to see where we all come from, and where we’re going.”

I looked at him as he continued at a rather fevered pitch. It wasn’t until that precise moment that I realized I had lost him. I had always had a vague, perhaps irrational hope that some day he was going to come back to Luminaire, back to our little neighborhood, and we could go strolling again down the Crystal Boulevard just like we used to. But that wasn’t going to happen, was it? For reasons I couldn’t possibly understand, he enjoyed being poked, prodded, and violated to become this ship. He loved it out here, in a way that I never could. He was in love, of all things, with a bunch of rocks. And that was the moment I knew.

I had lost my son to the stars.

This entry was posted on April 24, 2011 by mark726. It was filed under Hi Sec Sights and was tagged with Sinq Laison.