HY-RWO glows brilliantly in the distance.

My parents never quite understood why or how I would choose to live in the Empire for any extended period of time. Born and raised in the heart of the Federation, just a short shuttle ride from the gleaming Crystal Boulevard in the heart of Caille, they couldn’t understand how I could subject myself to the Empire’s conservative views. Now that’s not to say I don’t have my reasons. Anyone with any familiarity with my background would be familiar with my desire to stay close to the Eve Gate, if only so I could also occasionally check on the status of Sansha’s Violent Wormhole in Promised Land. And being only a few jumps out from Amarr Prime while still reaping the rewards of low security space certainly helps as well. And the fact that the Empire wouldn’t dare lay any of its religious strictures on capsuleers. They just happened to not particularly care about my reasons, and complain to me to move back whenever they sent me a communique.

An Amarr naval frigate protects the outskirts of the outpost.

Oddly, they seemed much more concerned that I lived in Amarr space than that I lived in low security space. I always assumed that was because they didn’t quite understand the differences between high security and low security space, and as long as they weren’t planning on flying out this way themselves, I had no desire to educate them on the subject. What they don’t know can’t hurt them… unless they decide to surprise me with a visit and get blown up in Ami by a few pirates. But that’s a discussion for another time with them.All this is to say that they were thrilled when I moved back to Gallente space, albeit temporarily. I had a mystery to solve, you see, and I’ve been moving more and more assets into Iyen-Oursta in an attempt to solve it. Being fairly secure money-wise for the foreseeable future, I uprooted the necessary ships and my parents were thrilled with the news.

Of course, they were less thrilled when I said that I was leaving again. Not for any extended length of time, of course, but I had caught wind of an Imperial military base in null security space, deep in Catch, and of course I had to go check it out. So I pulled out my trusty Tengu Scientia and was on my way to HY-RWO. As I warped in, Aura kindly gave me a heads up:

Local rumor has it that an Amarr Empire strike force has appeared in HY-RWO and are secretly orbiting one of it’s planets. Whoever they are after, he must be someone important.

Now, I don’t really consider myself a fancy person. I usually take “secretly” to mean “we won’t broadcast it for all to see,” at the very least. But apparently the Amarr Empire and I share very different ideas of the meaning of that word. Indeed, the Amarr were even kind enough to put up a beacon for Aura to lock on to for warp. Subtle, the Empire is not.

A naval Apocalypse engages its engines.

Still, given that I was deep in capsuleer-controlled space, I dare not test the Amarrian resolve by uncloaking in their midst. As such, I was relegated, as I usually am, to observing without interacting. Precisely why the Amarr were here, given Aura’s cryptic message, wasn’t entirely clear, but their base of operations around planet 3, moon 1 was apparently the place to be in HY-RWO. The Amarr had a sizeable military force here, consisting primarily of battleships and accompanying frigates. All glowed red to me and I shuddered to think just how quickly Scientia would die should the Amarr become aware of my presence. She was a ship built for reconnaissance and exploration, not combat, and she would fall quickly should she ever be caught. 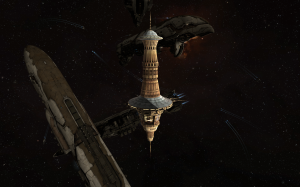 This lookout tower apparently serves as the forward operating base.

The ships milled around. I suppose the Amarr would say they were engaging in military maneuvers, but frankly that seemed to be giving “maneuvers” a bad name. Still, they managed a modicum of competency by not crashing into each other as they all hugged the compact and movable lookout tower that served as their forward military base here. The battleships hugged close to the tower, while the frigates scurried around edges. At a distance, a Bestower-class transport, presumably the ship that brought the lookout tower and its accompanying necessities, sat and calmly watched over the area. Oddly enough, if I was reading the comm traffic here correctly, the local military commander has made the Bestower his flagship.

The Bestower that seems to act as a flagship.

I sat and observed for a few minutes before gearing up to head back to Federation space and the mysteries that await me there. It was soothing watching the ships pass in front of the brilliantly blue star of HY-RWO when the camera drones were positioned just right. But I had more important demands on my time. That mysterious blue cloud wasn’t going to create itself, apparently…

This entry was posted on November 9, 2014 by mark726. It was filed under Null Sec Sights and was tagged with Catch.