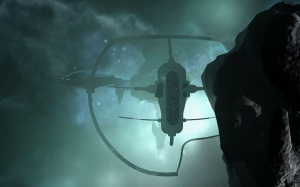 The main gladitorial station materializes from this mists surrounding it

I have never really been a fan of holo-programs, be they dramas, comedies, or the dreaded “reality” shows that seemed to be anything but. Still, as an academic exercise at least, I was intrigued by any show that felt it necessary to move itself from the confines of empire space out to the very fringes of New Eden, to ensure an unencumbered programming schedule. And so the Legendary Trials were born. Situated in the heart of the semi-inappropriately named (or, depending on your view of the Gallente, appropriately named) Assilot constellation out in Cloud Ring, the show broadcasts across the cluster. A basic GalNet search revealed this snippet from the show’s creators:

The famous dueling tournament, ‘The Legends Trial’, has moved to PPG-XC, to escape various expenses associated with having its tournament inside Federation space. Also by staging the tournament here, it can choose from a larger variety of competitors, such as criminals and members of outlaw organizations which would be immediately arrested in Federation space.

The Legends Trial is a popular show on Federation TV, it is broadcasted to billions of screens across many regions. Huge money is at stake, and gambling on the events is extremely popular. It is therefore not surprising that various criminal networks are working hard to ‘influence’ the outcome of the show and rig fights. The organizers of the Legends Trials have hired a sizable mercenary fleet to protect its assets, but even so it has become extremely vulnerable to pirate meddling, especially due to its new location outside of the protective embrace of Federation space. Certainly a freelance merc pilots dream come true. 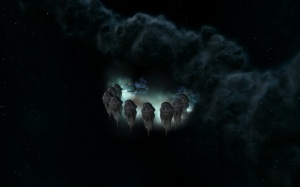 The asteroids create an impressive backdrop for the program

The Legendary Trials setup itself appears, appropriately, made for television. Despite having never actually seen the show, as I approached the scene I could almost see the opening title sequence in my head. The scene starts off from a distance, showing a an arc of perfectly placed asteroids. The camera zooms in to a misty blue nebula, where a station comes looming from the darkness. Epic music uprises dramatically as the camera continues to zoom in on not one, but two stations holding the day’s events. The camera zooms in to a dramatic looking window, where we see one of today’s challengers, soon to be followed by the other. It’s all very dramatic, even in my head.

A close up of one of the stations holding the arena for the contestants.

A few vessels can be seen patrolling the area, undoubtedly the mercenary vessels mentioned earlier that are hired to provide protection. None of them seemed particularly eager to talk to me, and I quickly got the hint that, despite the fact that the station makes no efforts to hide itself from the public eye, I should be on my way. After snapping a few more photos for my collection, I quickly took Scientia on its way. Almost unconsciously, I found myself also checking my local listings for the next episode of Legendary Trials…

This entry was posted on August 1, 2010 by mark726. It was filed under Null Sec Sights and was tagged with Cloud Ring.