The site of the eponymous birthday bash.

The backstabbing, conniving, and generally ne’er-do-well nature of capsuleers is famously well known across the cluster. Pod pilots are known to blow each other up without warning or provocation, and pilots will not hesitate to set the plans of enemies, acquaintances, friends, or people who happened to be in the wrong place at the wrong time back months if not years if given half of a chance. We are constantly pilloried across the cluster for not only enjoying, but thriving, in that kind of cutthroat environment, and yet the stereotypical capsuleer response is to shrug and immediately go and try to find the nearest thing to blow up yet again. The cycle of violence in the spacelanes of New Eden is long and well-established. 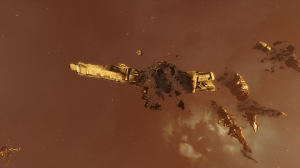 The wreck of Chappy’s Phoenix-class dreadnought.

All of that being said, one of the worst-kept secrets in New Eden is that capsuleers are an incredibly tight-knit community when push comes to shove. Sure, we’ll conspire to our hearts’ content when the threat is just another pilot, but we are also incredibly willing to leave all of our conspiracies behind at the spacedock door and let loose. The parties capsuleers throw when they get together are often legendary, and the best of the parties are those that cross corporate, faction, and alliance lines to get as many capsuleers together as possible. Having attended a few of them myself in my time, let me assure you that they are not to be missed. 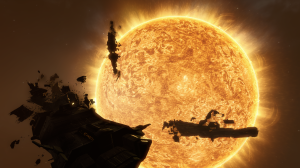 Tunudan provides a dramatic backdrop for the scene.

While we don’t necessarily need a reason to let loose and have ourselves a good time, it definitely doesn’t hurt, even when that reason is a sad one. A few weeks ago, a pilot registered as Chappy78 Chapman (“Chappy”, for short) posted on GalNet that he was looking to celebrate what was to be his very last birthday. Even with all of the advances of modern medicine, he has been diagnosed with a terminal illness, with a life expectancy of less than a year remaining. And he was hoping, given that prognosis, to teach New Eden how to say goodbye. With that in mind, he asked people to show up for a “huge fight” in the low-security system of Tunudan on June 24, saying he was hoping to lose his last two capital ships while he still had time to enjoy it.

Views of some of the other wrecks that can be seen nearby.

In classic capsuleer fashion, the community delivered in spades. Even before Chappy made it to the system, he found himself escorted through Uedama, a notoriously dangerous (though still high security) system, by CODE, a group of capsuleers whom normally revel in attacking the defenseless. And once he arrived, a crowd that soon swelled to more than 2,000 pilots greeted him at the star in Tunudan. Fights galore broke out around him, as he got to watch the festivities. From all accounts, a wonderful (and, thanks to my friend Razorien, well-photographed) time was had by all, including, most importantly, Chappy himself. And towards the end of the fight, he even managed to get most pilots present to send off his Phoenix-class dreadnought, with 762 pilots listed on the kill report. Given that Tunudan is a low-security system, his Phoenix was not the only capital ship to appear (or be destroyed).

The wreck of a Zirnitra-class dreadnought can be seen nearby.

And now, just weeks after the event, a beacon can be found near the star in Tunudan marking the event. It’s a simple site, just a collection of the wrecks of capital ships that found themselves blown up during the festivities. In place of pride in the center of the site, the wreck of Chappy’s Phoenix can be found. Surrounding it is a veritable matching game of capital ships from across the cluster. The wrecks of a Ninazu, a few Naglfars, and even a Leviathan can be found near the remains of the Phoenix. A bit further out, the ruins of a Zirnitra (one of those newfangled Triglavian-derived designs that have entered into service recently) can be see, separated from the rest of the group.

The entire site is dramatically backdropped by Tunudan itself. Its roiling surface, along with some breathtaking flares and prominences, provide a vivid background to the wrecks, the contrast with the stellar surface providing deep contrasts with the shadows from the wrecks. The entire effect, particularly from the point of view of a small frigate, is striking indeed.

Another shot of the wrecks.

I can only hope that Chappy enjoyed himself. Thankfully, every indication is that he did. I am thrilled that once again, the capsuleer community was able to come together to support one of its own. When people ask me how I can keep flying after all of these years, its situations like this birthday bash keep me connected with my fellow pilots. Our willingness to support those in our community who are in the most dire of circumstances, to bring a bit of joy to each other’s lives in dark times, is truly heartwarming. I can’t that I know how I’ll go (and, obviously, I hope that will not be an issue for quite a while yet), but when I do, I can only hope that I have as large of a community to fall back on then as Chappy78 Chapman does today in New Eden.