The impact site of the Caldari titan Shiigeru.

The odd thing about history is that all so often it quantifies things while losing the quality.  Think back to your history classes.  We learn names, and important dates.  But we so rarely learn the human qualities of history.  What people knew, what people felt.  History has that odd quality.  Even looking back at the Seyllin Incident, it’s much easier to remember that 500 million people died than it is to remember the sheer horror I felt that day as the news continued to roll in.  Human memory has the tendency of sanitizing horrors like that, undoubtedly a safety mechanism of some kind. And us capsuleers are no different. We rarely think about the horrors inflicted onto the crews of the ships we destroy; and when we do, we try to forget as quickly as possible. It’s just the human condition, be us mortal or capsuleer.

Still, that doesn’t mean I want to forget the horrors of Caldari Prime. I’m sure you’ve all heard the story by now. The Caldari titan Shiigeru, was, depending on the point of view, either a symbol of hope or terror. Tensions had long been building on the surface. This was one of those situations where, objectively speaking, both sides had a legitimate grievance (much as it pays me to say it as a loyal Gallente). On the one hand, the Caldari had reconquered its undisputed homeworld through much blood, sweat, and tears, and they had every right to want to protect it. On the other, it was simply intolerable to the Federation that an armed, 7 kilometer machine of death was sitting mere seconds away from the very heart of the Gallente. The loss of Gallente Prime to the Federation would be simply incalculable. And so, the two sides sat in an uneasy balance. The Caldari unwilling to give up its homeland, the Federation unwilling to risk a fight so close to Gallente Prime.

The devastation from the impact covers 1.2 million square kilometers.

But once the Caldari made the decision, after days of unrest, to move Shiigeru to low orbit, the Federation was forced to deploy. And thus began Operation Highlander. With CONCORD essentially declaring a state of emergency, havoc let loose both in orbit and on Caldari Prime itself. While Gallente forces seemed to dominate in the pitched space battle, it seems that Caldari forces held the upper hand on their homeworld. Things seemed to be reaching yet another stalemate when something never before seen in high security space occurred: Shiigeru died. While titans dying in null security space is relatively boring news these days, never have the denizens of high security space seen such a spectacle. The massive vessel simply broke in half, and the second half of the ship was destroyed. In many capsuleer battles, this would be the end of the story. But because Shiigeru was so close to the planet, the remaining half came crashing down onto Caldari Prime. 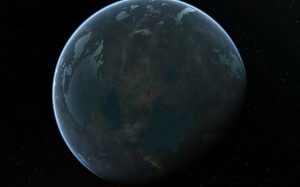 The devastation can even be seen from high orbit.

The result, as you might expect from millions of tons of metal, was complete devastation.  The ship came down 700 kilometers west of Caldari Prime’s second largest city, Arcurio, whilst teams from both nations were still fighting on the surface. The impact was so strong that buildings came down in Arcurio, and the entire planet needed to undergo intense environmental decontamination. The impact crater, with titanium diborite fires still raging even weeks later, can be seen from orbit, a chilling reminder of the effects us capsuleers can have. In total, some 1.2 million square kilometers near the southern end of the Kaalakiota Peaks were completely wiped off the map. It remains a minor miracle that the ship didn’t land closer to Arcurio itself.

But even from this kind of cataclysm, hope springs eternal.

However, despite all of the death and destruction, some hope comes from this. After years of tensions over Caldari Prime, the State and Federation have agreed to demilitarize the planet. Oddly enough, the eccentric mercenaries Mordu’s Legion will now provide planetary security on Caldari Prime. Furthermore, this also demonstrates the first mass-revolt against Tibus Heth’s reign in Caldari politics. Despite Heth’s continued railings against the demilitarization agreement, the megacorporations agreed to abide by the terms proposed by Ishukone. Perhaps now, for the first time in years, peace can come to Caldari Prime. Perhaps history will mark this as a turning point in State-Federal relations, even as it works, as it always does, to sanitize it for the history books.

This entry was posted on April 14, 2013 by mark726. It was filed under Hi Sec Sights and was tagged with Essence.