An overview of the mobile library the Krusual have established in Tanoo.

Libraries are a truly glorious thing. I remember my parents once taking me to the central library once in Caille, when I was perhaps 10. We had been rushing back and forth all day, trying to take in the wonders of the cultural heart of the Federation. The Crystal Boulevard itself seemed to pulse with the very lifeblood of the nation. Near the end of the day, we ended up near the royal palaces. It’s a little known fact outside of Caille itself that, technically speaking, Caille (and, indeed, the entirety of the Garoun continent) is a monarchy. The legacy of the great Gallentean hero Doule dos Rouvenor, the empire he helped found today exists more for ceremonial and administrative purposes more than anything else, but there is still technically royalty in the heart of democracy in New Eden, which I’ve always found more than a little ironic. It’s a powerless royalty, kept around for ceremonial purposes, but a royalty nonetheless. 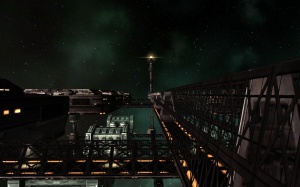 Much as I have an inherent distaste for anything involving royalty, one of the things that has always astounded me is the traditional royal architecture. As you might have guessed with my professed love for Amarrian architecture, I have a certain soft spot in my heart for grandiose architecture, which fits in perfectly with most royal styles. Much of the palace grounds are astounding, as you might expect, but what I remember in particular is the library. The only possible way I could describe it is as a temple to knowledge itself. The walls were covered in mosaics of the great Gallentean thinkers of the day, fastidiously maintained over the centuries. Each book is treated as a sacred text, despite the fact that the knowledge they maintain can be found across the four corners of New Eden, in that ethereal connection to everyone in New Eden known as the GalNet. Each room in the library is dedicated to a different branch of knowledge, from physics to agriculture to literature. The central room, in the classic sacrosanct position, was dedicated to history, with the mosaics telling the founding of the nation. This is the one room in the library that had been kept up to date. Not only do the mosaics tell the stories up until the building of the palace library, but to the modern day. Rouvenor’s conquest of Garoun sits directly opposite a stylized painting of the original signing of the Federation Constitution. It is truly a masterpiece and tribute to the entirety of the Federation and its continuing pursuit of knowledge, and it’s inspired a love of knowledge (and, generally, in geeking out) that continues to this day. 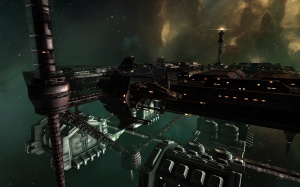 I bring this story up because I was reminded of my visit the other day. I had been traveling through the Republic, intent on some task or another. I was halfway through my warp in the system of Tanoo when I noticed something on my list of in-system structures that I hadn’t expected to see: a mobile library. Instead of immediately jumping out of the system, I of course turned Legacy to go see what the library had to offer. En route, I briefly scoured GalNet for information on the library. Information was sparse. The most I could find was that the Krusual tribe, one of the Republic’s Seven Tribes, ran the library. It apparently moved from time to time to new systems, offering up its knowledge to a new solar system while it carried out whatever research needed to be done. As my depleted vacuum field dissipated around me, I eagerly looked to see at what this new knowledge repository had to offer. 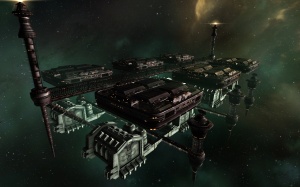 The various bunkers seen here were dedicated to various aspects of the library's research.

I will say this: the Royal Library in Caille this is not. And I will admit that I was briefly disappointed to see that. That said, the mobile library WAS in classic Minmatar styling: bare girders, harsh lines, and, even through the vacuum of space, the smell of duct tape. Still, even here, there were echoes of the Royal Library. Like the rooms back in Caille, the mobile Krusual library was split into multiple bunkers, each dedicated to a different area of research. Overall, the library appeared to be primarily dedicated to archeological research. There was a bunker dedicated to preserving excavated relics, numerous storage facilities, a linguistics analysis laboratory, and plenty of space for both researchers and that quintessential scientific pastime: the symposium. All connected and held together by various metal contraptions that seemed to me to be ready to fall apart at the drop of an errant hat in zero gravity (though I’m sure was actually quite a bit more stable).

Looking down the center of the library's facilities.

Unfortunately, the library wouldn’t let me dock to explore the library. Given the nature of the library as a research-based institution, I hadn’t exactly been holding my breath that they would let a random capsuleer come storming through (who knows what kind of mischief we’d bring with us). And I doubt the interior of the library even attempts to match the grandeur of the Royal Library in Caille. Still, I think a tour of the facilities would have given that same inner sense of awe, knowing that I’m almost walking through the knowledge that has been built over the course of millennia. Regardless of the form that libraries take, they serve a vital function in acting as a central repository of humanity. Be it in the temple to knowledge that is the Royal Library in Caille, to this simple research library, libraries will always have a place with humanity. After all, knowledge is power.

This entry was posted on April 1, 2012 by mark726. It was filed under Hi Sec Sights and was tagged with Derelik.