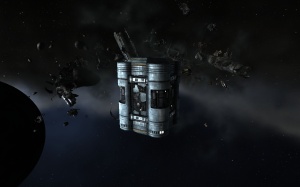 As a civilization, we put out a lot of trash. And I don’t just mean that in the metaphorical Renyn Shore context either, but the physical, dirty, smelly kind as well. Even on a ship as well run as most capsuleer vessels, there’s always some waste, be it in spent missiles that fly off into space, ammo casings, packing materials, construction debris, or just an output of heat that invariably increases entropy in the universe and leading us all to a very slow and cold doom. Even Professor Science, without an offensive hardpoint in her body, has been known to lose probes or dump reactor exhaust overboard, sending it off into the great final frontier. Most of the time, this kind of trash is left to float in endless oblivion or crash into an asteroid or burn up in an atmosphere. However, even the tiniest bits of trash can cause immense damage at the proper relativistic speeds. 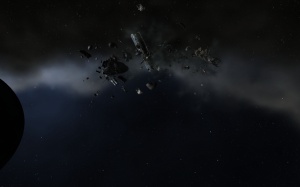 As such, at various times the different nations have taken it upon themselves to the interstellar environment a favor and begin cleaning up local areas. The nations invariably get weighed down by the sheer amount of, for lack of a better term, crap floating around, and soon give up, just a few years after they began. We’re left with, then, a collection of a lot of junk in one spot, and only a marginal reduction of random junk elsewhere. Now, if you ask me, it’d be a heck of a lot easier to just fling things into the local star once a large piece of trash was discovered. But what do I know. I’m just your run of the mill capsuleer who made his life out among the very stars you’re trying to clean up. Nope, don’t know a thing about it. Anyway, after a while, people tend to stop caring about a bunch of junk floating around in space, assuming it wasn’t causing any particular harm. And so it was in Deltole. As Aura explains: 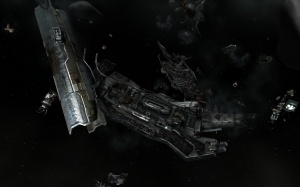 When the tourist industry in Algintal was in its infancy the local authorities became concerned that the abundance of space debris left by earlier colonists would hurt tourism in the long run. They carried out a hasty cleanup operation of the constellation, collecting most of the debris and dumping it in a remote place in the Deltole system. The intent was always to finish the job later and incinerate the heap, but the authorities have never gotten around to it and the Municipal Junkyard has been left alone for decades now. It is thus the perfect place for smugglers running illegal operations such as forgery. 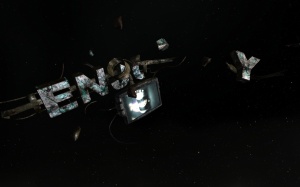 A dilapidated sign that still retains its product placement powers

Honestly, as proud as I am of the Federation, there are times I think that they are purposely trying to make it as easy for smugglers and other illegal ilk to operate as possible. Granted, its entirely possible that the big-wigs in the Underworld contributed rather handsomely to certain Senators’ election campaigns, so that statement might very well be true, if not something I particularly wanted to think about. Thankfully, my (thankfully short) attention was almost immediately diverted by something shiny that caught my eye. Actually, there were a LOT of shiny things that caught my eye. Shininess surrounded me as I took Professor Science into the heart of the junkyard. Entire superstructures of ships, old advertising signs, engines, old guns, it could all be found within this junkyard. I once heard that the garbage dump was one of the most valuable sites that an archeologist could find, and I had to wonder what this kind of site would tell a future archeologist about us. Given the amount of spent ammo and missile casings, I didn’t think it would be particularly pleasant. 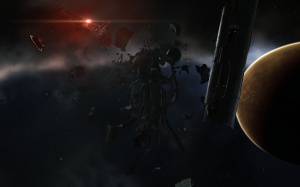 The twisted remains of a massive ship sit in the center of the junkyard.

After taking a tour of the junkyard, I still didn’t see any particular reason why we couldn’t set the course of the entire yard directly into Deltole itself. Anything hazardous still remaining in the various debris would surely be vaporized by the class-K star… eventually. It was better than having it sit here near a barren planet that could potentially have colonies on it. Who knows what kind of damage a 1/2 kilometer long former space ship superstructure could cause as it came careening down through the thin atmosphere of the planet. Best to get it all out of the way. But I didn’t have the power to do that. What I DID have the power to do, however, was to start paying closer attention to how I dispose of my trash. Some waste was unavoidable, but surely I could do something more with my 50 weekly cases of roe limbs than throw them out the airlock…

This entry was posted on May 8, 2011 by mark726. It was filed under Hi Sec Sights and was tagged with Sinq Laison.