Editor’s note (4/9/YC120): I can confirm that the ship is currently not undocked in Yulai. Hopefully it will be back soon for people to see! 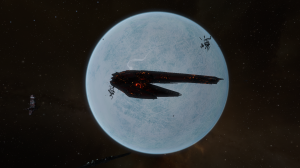 Triglavian cruiser in silhouette, with Professor Science nearby.

Drifters have always… unnerved me. While the Jove are similarly advanced in terms of technology, at least they deigned to talk to us every now and then. The Drifters, on the other, basically just showed up one day and started shooting. Hard. They even went so far as to one-shot Empress Jamyl, throwing the Empire into turmoil. Combine this aggression with their unusual and haunting method of propagation and their relentless scanning of New Eden for… whatever it is they’re looking for along with their apparent Sleeper allies, and I feel like my wariness is justified. Although the people of New Eden have eventually managed to settle into a kind of détente with them, and we can even punch back against them under the right circumstances, we still know precious little about them, such as even their main bases or what their motives are. And it’s clear that if they ever truly wanted to, they could wipe the floor with us. They’re just that advanced.

A view down the prow. The singularity core is the glowing red sphere.

The superiority of the Drifters, however, was challenged a few weeks ago. Out of nowhere, fleets of heavily damaged Drifter ships began appearing across the Cluster.  These fleets appeared in systems not normally subject to Drifter surveillance. While not hostile, capsuleers in their usual fashion blew them up anyway. Normally I would have been hesitant to condone this kind of unprovoked attack, given our history with the Drifters, I couldn’t blame the caution of the ARC fleets. As usual, communications with the damaged fleets were unsuccessful. However, when destroyed, they dropped trinary data vaults containing cryptic messages. At the same time, rumors started swirling about some race called the Triglavians. These messages were eventually cracked and found to contain heavily damaged video archives suggesting the source of the attacks on the Drifter fleets to not only originate from an unknown, but to take place in unknown space. It seems Anoikis may have more growing to do. 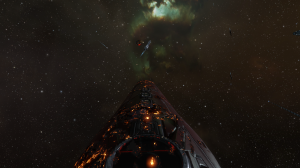 The ship is heavily damaged. A pod sit above the ship for comparison.

And then, yesterday, seemingly out of nowhere, a new ship appears in Yulai near the DED Assembly Plant. Its configuration appears to match the glimpses we get in the trinary data archives, but is otherwise completely dissimilar to any other known ships in the Cluster or beyond. Apparently piloted by CONCORD DED Agent Oveg Drust, the ship is, according to sensor scans (and evident from the multiple hull breaches) heavily damaged. According to Scope reports, the ship was found drifting in Raneilles before being captured by DED forces. In classic CONCORD fashion, however, the only comment from the pilot is hardly one at all, with Agent Drust merely saying that the ship is under quarantine before docking it within the nearby station. 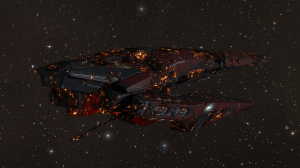 A view from the rear of the mysterious vessel.

The ship itself is a sight to see, to be honest. Approximately the same size as a New Eden cruiser, the ship is dwarfed by some of the curious capsuleer vessels that have come to see it. Composed of a main hull with two appendages sweeping downward, even in its damaged state it was clearly a dangerous ship. From the convergence of the two nacelles, a glowing red sphere can be seen; this, theoretically, is the naked singularity mentioned in the Discourse broadcasts. If that is truly what is powering the vessel, it suggests that the ship is orders of magnitude more advanced than even potentially the Drifters. Poor Aura clearly cannot make heads or tails of the craft, and her sensor analysis only reveals that it is a “Trig Medium”, an apparent confirmation (at least according to whatever sources Aura uses in her analysis) that this may well be a Triglavian ship. 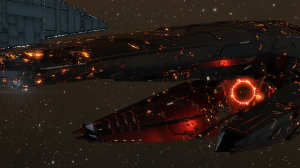 CONCORD’s plan for the ship remains unknown at this time.

The ship didn’t respond to my attempts to activate an entosis link, data analyzer, or relic analyzer on it (not that I was particularly expecting it to). As noted, the ship is surrounded by a small fleet of capsuleer vessels looking to see the new ship with their own sensors. The ship was unresponsive to any kind of communications, although I did manage to cause a reaction when I approached it slowly.

Now we have a new player on the scene. Hopefully, given that we both appear to dislike the Drifters, we could hope for an enemy-of-my-enemy-is-my-friend situation. But, especially given that we apparently managed to steal an enemy ship under duress, I did not have a ton of hope that they would react kindly to our presence. Still, I hoped that CONCORD aimed to try diplomacy with the Triglavians, because if they are truly capable of harnessing the power of black holes to power their ships, diplomacy may be our best hope.

This entry was posted on April 8, 2018 by mark726. It was filed under Hi Sec Sights and was tagged with Genesis.