The Elder War Memorial in Ami.

I startled myself a week or two ago by realizing that I had let my 10 year anniversary of becoming certified as a capsuleer pass without commemoration, celebration, or, indeed, note. Something that had, at the time, seemed so momentous, so important, that I could never forget it had become something so commonplace that I barely remember my life before becoming a pilot. I was generally good at making note of the event over the years, but it had slipped my mind this year. I guess it was just a sign that even the most significant changes in life eventually can become mundane, even when your life can end over and over and over again. Still, it was hard to believe that almost 1/3 of my life had been spent as an immortal capsuleer.

The Monument in Kor-Azor Prime

I was also surprised to discover that it has been nearly 10 years since the brief Elder War. Looking back, I didn’t realize that the War had occurred so soon after gaining my pilot’s license. It consisted of a very brief, but intense, invasion of the Amarr Empire by renegade factions of the Minmatar Tribes. After the discovery of the survival of the Seventh Tribe of Matar, the Starkmanir, the Minmatar Elders (who had long faded into legend for most of the Cluster) returned with a vengeance, leading a massive rescue operation using materiel and ships built up secretly for centuries. The Elders crippled CONCORD before invading the Empire, and was only stopped by the return of Jamyl Sarum (who should have been dead but apparently got better) and the use of a superweapon whose origin and eventual disposition remain a mystery even to this day. Of course, this is a very, painfully brief synopsis of the War, but it suffices for our purposes here.

The Memorial in Nishah, with the now-repaired station in the distance.

Although the entire war lasted for under 24 hours, the War had vast implications for the Cluster. It signaled the return of the Minmatar Elders, the discovery of the survival of the Starkmanir Tribe, the fallibility of CONCORD (a lesson I much took to heart as time went on), and the return of Jamyl Sarum. The Empire’s response to the return of Jamyl always fascinated me; it was clear that she had returned using some variation of capsuleer cloning technology, yet the Doctrine of the Empire meant they could never acknowledge it. And the fact that she had essentially single-handedly stopped the Minmatar invasion and preserve much of the Empire’s status quo meant that when she was proclaimed Empress, the Empire’s theologians could do little more than shrug. After the disastrous reign of Chamberlain Karsoth, Jamyl brought a much-needed sense of stability to the Empire, even if Jamyl eventually brought her own problems.

And the memorial in Andrub.

In an apparent bid to tie her reign to Jamyl’s, Empress Catiz recently commissioned the creation of 4 memorials to some of the battles from the Elder War. These 4 memorials were erected in addition to the two battlegrounds in Jarizza and Kor-Azor that I have chronicled over the years. They were constructed off of stations in Ami, Andrub, Kor-Azor Prime, and Nishah that suffered damage during the War. It took them nearly a decade, but they finally repaired the damage to those stations (I would make a snide comment about wanting to keep the damage for the sake of arousing public sympathy, but CONCORD still hasn’t repaired its own heavily-damaged headquarters and it was damaged on the same day).

The same prompt appears any time Aura is asked for information regarding the memorials:

This monument marks the honor conferred by the Empress of Holy Amarr on the countless heroes of the Empire who sacrificed their lives to repel the Minmatar Elder Invasion of YC110.

As imperial construction crews completed repaires of the nearby stations damaged in the attack, the monument was placed by order of Her Most Sublime and Imperial Majesty Catiz I, First Apostle of the True Faith and Sovereign Defender of the Imperial Rite. 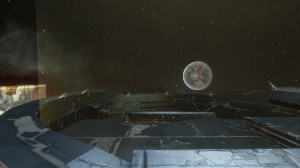 A close-up view of the Memorial in Kor-Azor Prime.

Professor Science flying near the monument in Nishah.

I spent time at each of the memorials, but given that they were all pretty similar in design, I didn’t linger at any. Still, I appreciated the reminder of what the Cluster was like back when I first gained my license. It’s remarkable how many things have changed since then: Jamyl is long gone, capsuleer alliances have risen and fallen, the Drifters have appeared. But still, so many things have tayed the same. My sense of wonder and wanderlust, the graceful ship designs, and the friends who make this lifestyle well worth it. It may have been 10 years since I first started flying in New Eden, but somehow, it feels like it was only yesterday.

This entry was posted on December 31, 2017 by mark726. It was filed under Hi Sec Sights, Low Sec Sights and was tagged with Kor-Azor.