[Editor’s note: Special thanks to Wilhelm Arcturus of The Ancient Gaming Noob fame for helping me find this site.]

Regardless of how much effort the Empires and the capsuleers (or at least the capsuleers who can be brought to care about these kinds of things) put into eradicating the various menaces of New Eden, at least one of the pirate factions or another always seems to be on the rise, each bringing their own particular kind of nightmare into the cluster. These days, the nightmares have been taking the form of those sanguinophilic cultists, the Blood Raiders. After exploding back on to the scene, so to speak, with their Crimson Harvest a few years back, they have managed to maintain momentum from their recent exploits, despite getting handily beaten back each time they manage to make the news.

Indeed, they seem to have only grown bolder over time. While a number of pirate factions have begun to expand their industrial base, the Blood Raiders have now gone public with exactly what they intend to do with their increased resource collection. Taking advantage of their recent successes, Bloody Omir and his lieutenants have developed their own capital ships, and have rushed headlong into the deployment process to get these ships operational as soon as possible using the new engineering complexes that have been recently released. As someone who has never flown anything larger than a battleship, I am hesitant say just how dangerous these new ships are, but regardless, the sheer tonnage of them raises the threat level and force projection that the Blood Raiders would be able to deploy with ease.

Needless to say, the Blood Raiders have made it difficult to find their new shipyard. However, regardless of any advances in technology, you can’t build a ship without raw materials. And to get those raw materials, you need to send out mining ships to collect them. Some relatively resourceful pilots realized that people just need to follow the ore (so to speak) to find out the location of the new Blood Raiders shipyards. With that tactic in mind, it wasn’t long before the pilots tracked down the location of the first shipyard to the system E-DOF2 in Period Basis. With the location found out, I made my way out there at the first opportunity. 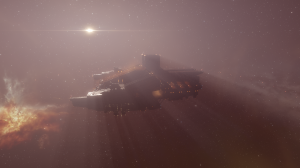 The system itself was deep in null security space, but thankfully I managed to get myself out there with relative ease. With help from a fellow chronicler of the happenings of New Eden, I managed to warp to the Sotiyo-class engineering complex undetected. What I saw there was… odd. While the shipyard was defended by a small fleet of ships of various classes, their coordination seemed… almost lacking. Indeed, I witnessed quite a few ships, presumably defending other Blood Raider interests in the system, warp in to the shipyard, only to miss the shipyard and overshoot by several hundred kilometers. The ships would then have to turn around and warp once again to get in range to properly defend the system. Perhaps whatever ailed the Blood Raider navigation systems also affected my camera drones, as I was unable to keep them focused on most objects near the Sotiyo for more than a few seconds at a time.

A Blood Raider mining ship in a nearby asteroid belt. Sources say a mining operation can always be found in the Sotiyo’s system.

The Sotiyo itself was skinned to make it obvious who owned it and what it was used for. Fires belched from the various processing systems as the Blood Raiders scrambled to build their capital ships before the capsuleer pilots, inevitably, arrived in force to boot them out and seek their prizes.

And arrive the capsuleers eventually did, bringing the Sotiyo down only a day after I was able to find it in E-DOF2. Despite the Sotiyo’s destruction, Omir Sarikusa sounded inordinately pleased with himself, suggesting that they would go on to rebuild the shipyard somewhere else in their native lands, allowing the legions of Omir’s army continue their bloody ascendancy.

This entry was posted on May 27, 2017 by mark726. It was filed under Null Sec Sights and was tagged with Delve, period basis, querious.