Wreck of the EF Seraph 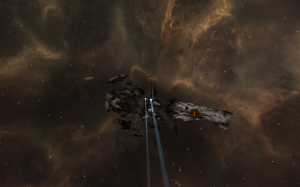 As a travel writer, I tend to see my job as almost quasi-journalist, but with a twist. Rather than merely reporting the events of the day using words, I try to capture both the spirit and the beauty of the areas that can be found throughout New Eden. For many sites of natural beauty or gorgeous manmade structures, I have no qualms, moral or otherwise, in my attempts to capture the essence of a site. Sometimes, however, I have to admit that a site, while gorgeous and important, was formed in the midst of much death and destruction. In those cases in particular, I try to not just become another heartless paparazzi photographer, going for the ultimate scoop no matter the moral cost, but I try to capture the event’s dark splendor, showing both its beauty and the cost in human lives. I will not claim to always be successful in such endeavors, but I can at least claim to have tried to show the darker sides of space.

The ship was destroyed mere kilometers from the station.

I find myself feeling much more uncomfortable with today’s entry, though I suspect my discomfort stems primarily from just how recently the events in question have occurred. This weekend was supposed to be Empress Jamyl’s victory lap. After an extended absence from the public eye, the Empress had returned with a vengeance (though perhaps less vengeance than she had when she first arrived at Sarum Prime those many years ago). In numerous public appearances, Jamyl had taken to not only making token public appearances, but showering praise on supporters of the Empire, and even opening herself up to questions from the local press (myself included). Her ostensible reason for returning to the public eye was to champion the construction of the new Amarr flagship, the Imperial Issue Abaddon-class battleship Auctoritas, which was to set a new technological standard for ships of the Golden Fleet. After weeks of work and testing, the Auctoritas was due to be commissioned this past Friday. The Empress herself showed up for this commission, piloting the Avatar-class titan EF Seraph, in which she had made all of her recent public appearances.

The titan wreck dwarfs even battleships.

Although the commissioning started well, it ended in tragedy. Within minutes of the start of the ceremony, the Empress was interrupted mid-sentence with the arrival of a fleet of over 150 Drifter battleships. Without warning or ultimatum, they opened fire on the Seraph with their destructive doomsday-type weapon. Before anyone could react, both the Seraph and, in quick succession, Jamyl’s pod were destroyed. Without a word, the Drifter fleet then warped off again, leaving a stunned audience. One of the strongest ships in the known universe brought down in a single volley, followed by the quick assassination of the leader of the largest empire in New Eden. Although chaos initially reigned at the proceedings, within hours the Court Chamberlain announced the initiation of new Succession Trials as powers from across the cluster reacted to the news. It is worth noting that the Jamyl’s body was not found in the wreckage, and that some parties (myself included) are very interested in seeing examining the body before allowing it to be laid to rest.

I pay my respects.

I had been unable to attend the ceremonies because of business planetside, but I had been eager to see exactly what technological advances the Auctoritas was to herald. Instead, I found myself watching my newsfeeds in horror as the situation unfolded. And it was with some trepidation that I found myself heading to Safizon only a few hours after her death, somewhat unsure of what I would find but trusting the instincts I have honed over the years. I had no desire to make a spectacle of the area or of Jamyl’s death, but I felt a need to see it with my own eyes. The wreck of the Seraph sits where it fell, only a few kilometers off the Amarr Navy Assembly Plant, the tomb of countless thousands beyond the Empress. Given the site’s importance, I suspect the ruins will remain well-tended for the foreseeable future.

The midsection of the hull was the most badly damaged section.

Although the ship itself cracked in two, the hull is still very recognizable even after being hit by so many simultaneous weapons blasts. Unsurprisingly, energy still crackles through the superstructure as emergency backup generators struggled to kick in and restore power. Lights still flickered, as if someone were just fiddling with a light switch across most of the ship. A lie I was almost able to believe, if only I could ignore the massive hull breaches and floating debris surrounding the area. I was once again struck by the, if you’ll excuse the choice of adjectives here, titanic nature of the ship’s proportions. As a pilot who primarily focuses on frigates and cruisers, I was once again reminded that my ships are often nothing next to the gargantuan vessels that other pilots fly.

I was by no means the only one to visit the area. Some visitors seemed to be pilots with similar intentions as myself: there to see the fall of an Empress and pay their respects. Others, the more faithful among us, held vigil, just a few of the countless memorial services to be held in the coming weeks as a nation mourned not only their leader, but also their voice of God. Others seemed to be on guard, either from fear of looters or another Drifter attack. I can’t blame those who are worried of another attack: the Drifters have shown substantial interest in the Empire, moreso than the other three nations of New Eden. But the Drifter attack also shows that no one is safe when the Drifters decide to take out a target. Let’s just hope that, come what may, we learn to stand together against whatever it is the Drifters may have in store for us. That may be our only hope in withstanding the coming months.

This entry was posted on August 24, 2015 by mark726. It was filed under Hi Sec Sights and was tagged with Domain.