For the remarkable freedom that capsuleers enjoy from most state-imposed laws in terms of fraud, murder, and general scumminess, we also have to put up with a significant amount of surveillance. Oh, they don’t mention it much, of course, but the space lanes throughout New Eden are thick with the tendrils that CONCORD sends out to make sure we’re staying in line. How else do they know instantaneously when one capsuleer is attacking another without justification, even outside of high security space? Be it our wallet or our in-ship comms systems, few things in a pilot’s life are safe from CONCORD oversight. In order to pull something like that off, a truly massive surveillance network needs to be set up, often hidden from the prying eyes of us capsuleers to keep us from its secrets.

Of course, one of these surveillance posts was bound to be found at some point. Surprisingly enough, capsuleers were not the ones to find it. Rather, the Angels found a surveillance site (capsuleer pilots are by no means the only ones on CONCORD’s watch lists) and acted quickly to take it out. In remembrance to one of the agents presumed lost in the attack, CONCORD made the site a public memorial, and perhaps more importantly, gives us pilots a sneak peek at just what kind of systems CONCORD uses to keep a watchful, if not always particularly reactive, eye on the cluster. The memorial can be found in Arnher, a low sec system a few jumps out from Hek in Metropolis. As I approached the site, ever-helpful Aura pulled up the limited information from the local ‘nets that she could:

This relay station was used by the Communications Relay Committee until July YC116, when it was abandoned after an assault by Dominations forces.

Containing equipment used by the CRC to monitor and intercept radio, wireless and fluid router transmissions, the DED believe that the site was attacked after intercepting encrypted data broadcasted to Angel Cartel headquarters from a scouting party in Evati.

The CRC operator of this site, codenamed “Eshtir”, has vanished without trace and is now reportedly on the run from Dominations forces, whom have placed a sizeable bounty on his head. 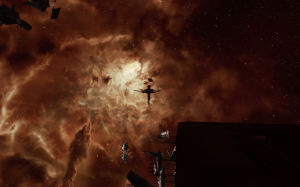 Support girders stick out from the remains of the destroyed battleship.

Compared to some of the other covert reconnaissance sites I’ve seen, the CONCORD site is surprisingly simple in design, though I suppose it’s fair to assume that CONCORD probably did a bit of cleanup work and got rid of all the real goodies before broadcasting its existence to anyone in the system. Still, I was expecting a bit more than just a receiver array and a power/shield generator in terms of equipment (and don’t even ask me how an antenna is supposed intercept fluid-router transmissions, but I suppose that is yet another CONCORD mystery™). But if it works for them – and from all indications, it does – who am I to argue?

The power generator for the site.

The only other notable item at the site was the remains of a Raven-class battleship; apparently, the one that Eshtir was on at the time of the attack. My scans didn’t shed any light as to Eshtir’s fate, but I wish him luck nonetheless. The Angels are relentless hunters; if anyone is capable of finding Eshtir now, it’d undoubtedly be them.

After a few minutes at the site, it was time for me to move on. New sights beckoned, even if they were coming fewer and fewer these days. Still, if there’s anything I’ve learned about New Eden in these past years, it’s that it’s always full of surprises. You just have to know where to look.

This entry was posted on August 15, 2014 by mark726. It was filed under Low Sec Sights and was tagged with metropolis.