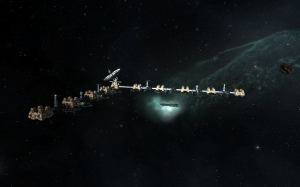 Industry is a mystery to me. There, I said it. Oh, sure, I get the broad concept: gather the components, get a guide to put those components together, push button, receive ship (or module, or ammo, or…). But, as always, the devil is in the details. Even just a glimpse of some of the data that serious manufacturers must wade through in order to make a profit gives me a headache. I’m not one of those people who thinks that mining an asteroid will give me the ore for “free”, but asking me to value those items will often result in a blank stare and, if we’re lucky, a number of some kind. But this is not to say that I have a deep appreciation for manufacturers. It might all be gobbledygook to me, but that gobbledygook results in almost anything that I may ever need while flying around New Eden. I simply don’t understand it, and I accept that I don’t understand it. More power to those that do.

A few of the ships docked at the shipyard

Although industry is a mystery, that doesn’t mean I can’t appreciate its beauty. Nowhere is that more apparent to me than a bustling shipyard. There is a special energy here; one that you can only find in the throes of creation and skill. From skeletal hulls to nearly complete space vessels, it’s fascinating to watch a ship grow from the bottom up. Everyone you talk to takes a special pride in their work. And how could they not? Spending so much time and passion on a hull imbues it with part of their own energy. I’ve heard of some people calling their ships their children, and I have no doubt that they actually view it as such. Even if the vast majority of the vessels produced are doomed to be destroyed, that doesn’t mean that workers won’t put in as much care as they can to ensure the vessels go down fighting.

A Scorpion class ship under construction

A small Caldari Navy shipyard can be found in Astoh. It’s not a particularly strategic system, but with the ongoing fighting in Black Rise, it’s undoubtedly seen its share of fights. Aura has little to say on the subject, noting only this:

This small compound acts as a fleet staging point, relaying squads off to their deployment locations inside Black Rise or housing them on their way back to State heartlands. Various Caldari Navy officials make this place their temporary home, and Astoh itself is rumored to house some of the higher-ranked officers involved in daily operations across the war-torn region.

The shipyard itself is fairly small in size, but bustling nonetheless. Seven drydocks comprised the bulk of the site, with ships in varying stages of completion. Unlike some of the other shipyards I’ve seen recently, the Astoh yard seemed to specialize in subcapital vessels. A few Caracal-class cruisers and as well as a Scorpion­-class battleship or two were under construction at the time I visited. Some were barely recognizable, either undergoing heavy repairs or just starting out as little more than a keel. Others were clearly nearing completion, with drones and various workers scurrying around its exterior. Each of the drydocks had attendant facilities attached, acting as worker housing and support, protection, entertainment, and all the other facilities necessary for this small city in space.

The remains of an old station sits nearby

Beyond the drydocks themselves, the Caldari Navy had send some serious protection to protect the workers and the facilities here. A number of cruisers and frigates scurried about, patrolling the outer edges of the shipyards against all intruders (though, oddly, not giving me a second glance). A few battleships also lumbered about. But the best indication that the Caldari considered this site one of significant strategic value was the Chimera-class carrier that acted as the flag vessel of the fleet. Sitting in the middle of the shipyard, like a mother hen guarding her chicks, the carrier kept a watchful eye over all other activity in the shipyards and beyond. Always a bold one, I flew Professor Science right up to its hull, as always goggling at just how much capital ships dwarfed my little ship.

A small distance off from the main facilities sat an old, drifting wreck. Perhaps the old station, with attendant-and-still-sparking Quafe sign, indicated a different past for this particular deadspace pocket. But given the severe deterioration of the station, the past has very much been left behind. Oddly, the few remains of station superstructure look almost Gallente in origin. The graceful curves and organic feel was distinctly non-Caldari in design. But a Gallente station in Black Rise, particularly an old and decrepit one, made little sense given that Black Rises was only disclosed to the rest of the Cluster (including the Gallente) only a few short years ago. The station remains certainly raised a number of questions, but as is often the case, this seemed to be a mystery that I would not solve any time soon.

Creation and decay in one picture

I stayed at the site for quite a while, watching the ebb and flow of the workers, machines, and security vessels as they all worked together to create and build these gorgeous ships that we fly every day. Although these ships were to be used by the Caldari Navy, an entity that does not exactly have my best interests at heart, I still admired the sense of professionalism and efficiency I saw in the shipyards. The carrier at the heart of the shipyards was a truly stunning vessel; I was reminded again of the odd beauty that Caldari ships had, even if it was not a design that I would have thought of. In fact, I seemed to have an odd fondness for Caldari aesthetics: despite being a proud Gallente citizen, almost of my ships (and certainly the ships that I flew most often) were Caldari in origin, suggesting that the odd asymmetries and harsh edges appealed to me in an almost visceral manner.

Finally, I banked the Professor on an exit vector. As the warp tunnel formed around me, I was once again amazed at the thought and design that had to go into building even one of these vessels. I have absolutely no idea how people are able to juggle this on a day-to-day basis, but I guess that’s why no one pays me to.