Capsuleers represent the absolute epitome of society in New Eden.  The money that even the most modest of capsuleers make in a day could completely support a small city for a year.  And yet, even within the cream of the crop, there is stratification.  While your humble travelogue writer makes more than enough money to support his own lifestyle, my bank account is a mere fraction of the true power players in capsuleer circles.  While I can comfortably buy and fit new ships when I need them, truly rich capsuleers can buy much, much more. Ships are no problem for people who can buy and sell moons, planets, systems, even entire regions on a whim.  To an extent, I envy those people, with more money than they know what to do with. But, unlike many of those types, making money for the sake of making money has never been a particular interest of mine; as long as I have enough money to comfortably support myself, I’m happy.

A custom modified Megathron glints in the sunlight of Lirsautton

One of the interesting things to watch in the truly rich, however, is how they choose to spend their money.  Do they prefer gaudy displays of their own wealth, proclaiming their monetary assets to anyone who is willing (or just able) to listen?  Do they use it to start philanthropic endeavors (“philanthropy” and “New Eden” don’t seem to necessarily go hand in hand, but, as usual, capsuleers continue to surprise me) Or do they choose to use it to buy the latest hot new crazy sweeping the cluster? Or is there some particular interest of theirs that their wealth finally lets them truly invest in?  This final option is always interesting, because precisely what someone chooses to spend their money on, what collections they want to start, give an interesting insight into people, even the super-rich.  It probably wouldn’t surprise you to learn that many people choose to pursue rare ships in that situation, but sometimes there are somewhat more esoteric pursuits, depending on the person.

Of course, the echelons of the truly rich are not necessarily limited solely to capsuleers.  Hooking yourself up to a pod and combining your very essence with a starship is not the only way to create fantastic wealth in New Eden; there are plenty of ways to use your wiles on more planet-bound endeavors.  One such person is Mamo Guerre, heir to the Fedmart fortune.  As Aura explains, he’s created his own little wonderland: 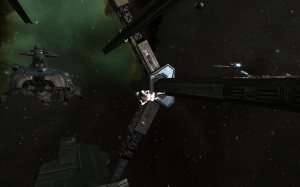 Mamo Guerre is an extremely wealthy Gallente citizen who’s father earned the family’s wealth in the retail industry.  He owns a sizeable part of FedMart and has been listed in the Opren’s 100 Wealthies Men list of Everyshore.

One of Mamo’s most prized possessions is the moon of Lirsautton VI.  Every inch of it is his, and the area around it he fondly nicknamed – Mamo’s Backyard.

You can find all kinds of gadgets, ships and structures in Mamo’s Backyard.  It has become sort of a junkyard, as Mamo has a tendancy of not cleaning up his mess.  Most of the ships floating here are not functional, having been left here to rust after they have served their purpose, or taken apart in one of Mamo’s experiments.

The sleek lines of the Opus yacht.

The Backyard isn’t marked by CONCORD surveys, so you’ll have to know what you’re looking for. Indeed, that’s a good bit of advice in general when discussing the Backyard: you have to know what you’re looking for.  When the warp bubble first collapses around you, it’s easy to think that you’ve just managed to warp into the nearest scrap yard.  But that is apparently just Mamo’s penchant for collecting anything and everything, valuable or not.  While most of Mamo’s purchases have, over the years, been reduced to little more than unrecognizable piles of scrap, there are a number of gems hidden within this scrap yard.  For example, near the shipyard where Mamo conducts most of his research sits a fully functional Megathron.  While rumors are floating around that the ship will be undergoing a Federation-mandated refit in the near future, the ship remains one of the most emblematic ships out there. Perhaps not quite the level of the Rifter in terms of sheer recognizability, but its twin-prong design is well known.

The yacht is located near the shipyard

The true jewel of the Backyard, however, is off to the side, almost hidden.  An Opux-class luxury yacht, Hagathia, sits almost forgotten on one side.  Only a handful are known to exist, and only two are owned by capsuleers.  Although it won’t hold its own in any kind of fight (not to mention that with five high slots, but only two launcher and two turret hardpoints, it won’t be winning any prizes for superb fitting theory), if you’re looking for the end-all be-all of superior luxury, Opux is the place to look.  With more gold plated interiors than an Amarr cathedral (not to mention the standard Federation “pleasure nooks,” for lack of a more family-appropriate term), the Opux is the first and last word when it comes to cruising the starlanes in style.  Their rarity in their capsuleer community (rumor has it Opux refuses to sell to capsuleers) only heightens the mystery and allure surrounding the vessels.  Seeing it tossed to one side of a scrap yard, not even being used while being exposed to the harshness of space, is shocking, to say the least.

Beyond the aforementioned Megathron and yacht, a few other odds and ends sit amongst the scraps, nothing else of particular note.  Intriguingly, Mamo seems to have taken advantage of a local deadspace field and locked up some of his treasures behind an acceleration gate.  I was unable to get past the gate; I didn’t have the proper access key with me.  But I couldn’t help but wonder what Mamo had hidden if he felt comfortable leaving an Opux yacht in plain sight for anyone to find and visit.  But I guess it all comes down to a matter of perspective; while capsuleers might covet an Opux due to their rarity amongst us, to Mamo it might mean little.  That’s one of the funny things about money.  People often think of money as giving you access to anything your heart desires.  But when you have that much money, in a weird way it lets you prioritize your life and show off what’s really important to you.  Not just what you buy, but how you use what you buy.

A few other ships can also be discerned amongst the scraps

I know I sound somewhat covetous about Mamo and the other true isk barons of New Eden, but in many ways I’m not.  What I covet the most won’t be found in spreadsheets and .01 isk wars.  What I want the most can be found Out There, and thankfully, you don’t need too much money to be able to see what New Eden has to offer.

This entry was posted on October 14, 2012 by mark726. It was filed under Hi Sec Sights and was tagged with Everyshore.