Capitalism works. At least, it does for us. Although the State is best known for its free-wheeling capitalistic ways, many non-capsuleers are unaware of just how cut-throat business deals can be amongst the demigods. The fury of the .01 isk battles is well-known to any trader in New Eden, and all-out wars have been started over broken contracts, be they for general services or even just simple courier contracts. And capitalism can even thrive in death, especially when bounties are placed to help effect a massive market-manipulation scheme. The SCC has been either unable or unwilling to impose much in the way of regulation on capsuleer markets outside of requiring truth in advertising (though it’s your fault if you can’t read it correctly). Indeed, CONCORD interventions in the market are incredibly few and far between, with most scams being completely ignored by regulators. Indeed, the New Eden market may be the closest that humanity has ever come to the archetype ideal of a capitalist system.

The exhaust from one of the colony’s industrial sections sits near the top of this photograph.

But, of course, it helps that capsuleers are rich beyond the dreams of planet-bound avarice. Even the poorest capsuleers can quickly earn more isk in an hour or two than the vast majority of humanity will see in their lifetimes, not to mention the lifetimes of their children and their children’s children and their children’s children’s children. Any retiring capsuleers of any worth will be able to retire in luxury for the rest of their natural born days. Unfortunately, if the capsuleers are the winners of the economic game, someone has to be the loser. And that “someone” is much of the rest of society, even if us capsuleers don’t often have to deal with the lower classes. The Caldari, in their market-oriented ways, allow much of the same freedom in capitalistic endeavors, but even they have imposed some fairly harsh rules on how their markets can operate.

But these rules haven’t stopped the underlying Caldari realization that people like money. And they like having things. And if they can have things that are worth just about anything for free, someone is likely to take them up on their offer. So when confronted with the economic realities of settling a pirate-infested area of Okkelen, it’s fairly unsurprising that some government official took the logic to the next step and realize that they could offer financial incentives to settle in Okkelen. As long as the contracts had the proper fine print, the megacorps (and thus the State) could get all the benefits of a settled constellation, with the new colonists taking all of the risks and costs of driving the pirates out and settling the area. For the corporations and government, at least, it was a win-win deal. Appeal to a common State citizens sense of both patriotism and promise of future riches, and they would come running. And thus was born Shady Acres (the government official who came up with the name clearly wasn’t well-versed in the art of subtlety). As Aura explains:

Some genius working for the State had the idea that the best way to settle Okkelen was by handing out settling permits free of charge. The idea was for these hardy settlers to take care of business themselves, persuading the local banditos to leave the territories that has been theirs for years. Amazingly enough, there are individuals willing to take this on.

The only other ship that can be found in the area.

As might be expected given the harsh economic realities of colonization and my less-than-enthusiastic discussion of Shady Acres thus far, a posh condo in downtown Caille this is not. Little money was diverted to setting up living quarters for the colonists, and the efforts show. Shady Acres is stuck in a sad little corner of Ihakana, a low-security system already, in an orbit high above Ihakana IV; appropriately enough, a barren planet. The “condos” are little more than your standard asteroid-based colonies, held together by a series of metal girders. Evidently, the State tried to diffuse costs even more by getting some corporate sponsorships, but the poor condition of the Quafe sign suggests that that particular advertising deal was never renewed. The State has seen fit to give the fledgling colony some protection though: a Caldari Navy Raven sits protectively over the colony, warding off all but the most brazen of pirate attacks, and offering missions to the enterprising capsuleer. The entire area sits within a cloud of dull gray dust, adding an even more depressing tone to the scene. 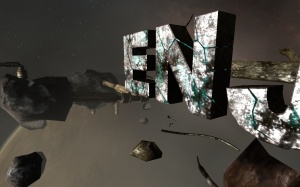 The entire area reeks of decay, but that hasn’t stopped some from trying to find their way out here.

Overall, it’s a rather dreary place and certainly nowhere I would seriously consider living. But the part that struck me was that people chose to be here.  People looked at their lives, and decided that living in a hunk of rock in the middle of a pirate infested system that’s not even under CONCORD protection should something go awry was somehow better than what they currently had. That thought stuck with me as I viewed Shady Acres. Not only did it prove the age old adage of “if you build it, they will come,” but it proved that while capitalism may be one of the best socio-economic systems that we have, it was far from perfect. Some people will always be left in the metaphorical and literal dust. I took one last look around before left. As I warped off, I made a discreet donation to the Sisters of Eve’s anti-poverty programs and hoped against hope that that would sooth my conscience. Somehow, I wasn’t holding my breath.

This entry was posted on June 23, 2012 by mark726. It was filed under Low Sec Sights and was tagged with The Forge.