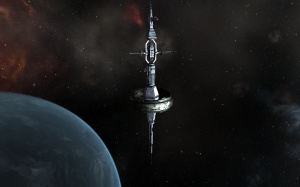 NOH Corporation attempts to show the flag in Airmia.

There’s a term from the old wet-navy days that I’ve always liked: showing the flag. It refers to the idea that it’s not always necessary or possible to have full warships at every port or colony. Instead, a nation could send in a smaller warship to remind not just the colonists, but those who might wish to exploit the colonists, who has authority over the area. These kinds of missions would often have ships at full display, ‘showing the flag’ of the nation to remind people just who has jurisdiction. Sometimes, it was used just for reassurance to the local populace that their nation cares for them and wants to protect them. At other times, it could be used to exert influence over political processes. Rarely would these kinds of missions be a significant show of strength in and of themselves, but rather it would remind people that significant strength and death-bringingness could occur if the situation doesn’t go in the way that the Powers That Be would like.

The acts as a forward base to consolidate NOH efforts in the system.

With colonized planets spread out over dozens of light-years these days, the need to show the flag has once again re-emerged as a tactical doctrine. You can see this development at basically any gate in high security space. A token security force, be it from CONCORD, the local navy, or local customs officials, can be seen at many gates, showing that they are willing to respond to attacks with force, if necessary. The need to show the flag takes on a strange twist in the Caldari State, however, since most often the State itself is not the one showing the flag. Instead, the various megacorporations are the ones that claim territory for their employees, as well as maintain order. When the State expands into new areas, each megacorp needs to claim their own piece of the pie, and maintain their dominance by, among other things, showing the flag when needed.

An example of this can be found in the fairly recent annexation of Airmia, in the Okkelen constellation. Airmia has been claimed by Nugoeihuvi (NOH for short), but they have yet to be able to move full corporate infrastructure into the system. Until that time, they have planted the flag through by establishing a station foundation in orbit of Airmia V. As Aura explains:

The officials supervising NOH’s colonizing efforts have ear-marked this location as an ideal place for a space station. With no station yet in the Airmia system, the construction of a station here will ensure NOH’s dominance of the system.

One of the denizens that have set up station at this site.

For now, the Foundation appears to act as a forward operating base for NOH, forming a central repository for NOH to funnel supplies and personnel through before moving on to colonies throughout the system. This also forms the central depot for NOH defense personnel, since, like Ani for the Minmatar, Okkelen has a distinct pirate problem. Given the odd governance structure of the State, it actually falls under the duties of the various megacorporations to bring order to the area, with the State Navy reserved for the response to larger threats, such as the other empires. But to deal with the smaller pirate entity, the State’s policy is clear: if you want it, you’re going to have to earn it. And NOH is in the process of earning it, while trying to keep the other megacorps at bay.

Parts of the station-to-be can be seen through the repair facilities here.

The site itself is fairly simplistic, at least for now. A Caldari control tower has been erected, which will presumably act as the central core of an upcoming NOH station. Basic construction of the station has already started with a ring surrounding the tower, but other than that construction seems to have halted for now. The roiling conditions in the Okkelen constellation is matched by the storms roiling on the surface of Airmia V below. Flashes of lightning punctuate the darkness, even thousands of kilometers above the planet, easily visible from the Foundation site. A few kilometers distant, NOH has also established a small repair depot for ships injured in the course of establishing a claim over the system. However, beyond the tower, the depot, and the planet, the rest of the site is rather isolated. A few smaller ships have taken up residence, offering missions either on behalf of NOH or for their own purposes. One of them appears to be a rather unfortunate capsuleer who has recently lost his ship, if the pod sitting nearby is any indication. But beyond that, NOH does not appear to have devoted many resources to the site as of yet.

I only spent a few minutes here. As you might imagine from the description, there really wasn’t much to see. But that may not always be the case. If other corporations start making a move for Airmia, NOH might have to devote considerably more resources than a mere flag to establish control here.

This entry was posted on June 2, 2012 by mark726. It was filed under Hi Sec Sights and was tagged with The Forge.