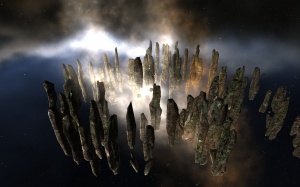 A look at overlapping Yan Jung ruins in Deltole.

It’s sometimes easy to forget that the Gallente, Caldari, Amarr, and Minmatar weren’t the first civilizations to conquer the stars. The ringing silence that beckoned first the Amarr, and then the other empires to the vastness of space seemed to assure all concerned that they were expanding into virgin, untouched lands. After all, if anyone had come before us, if anyone else had established colonies throughout the cosmos, surely they would still be around to greet us, right? But, of course, the only thing that greeted the first modern explorers was the resounding silence of the centuries.

Of course, the archeological record shows that those thoughts, tempting as they are, just simply are not true. It has been well-established that we are, at best, the second generation of civilizations to conquer New Eden. Well, third, if you presume that the people from the EVE Gate also originally colonized the area, though the record from that era is much more spotty. Regardless, the record is fairly clear that there was, in fact, a generation of four empires that were roughly analogous spatially to the modern empires. The Takhmal roughly correspond to the modern day Amarr empire. The Sleepers, of wormhole fame, originally inhabited Minmatar space before moving on to Anoikis. The Talocan once ruled an area roughly analogous to the modern day Caldari State. And finally, the Yan Jung originally settled within modern day Gallente space. The Jove, of course, seem to have been the only continuous civilization in both the ancient and modern era. The chance to work my way through the Jove archive would be a dream come true, but unfortunately I don’t foresee that happening in the near future.

A so-called Gargoyle: "A very old object that seems to once have acted as a guardian of this space. It is not active at the moment and perhaps it has malfunctioned."

Barring a near-miraculous change in Jove policy, I would be stuck learning about the ancient races the old fashioned way: through hard work and archeology. Thankfully, a Yan Jung site has already been found and research has already begun. Unfortunately, the research is being done by an arm of the Serpentis Corporation. Between Yan Jung defense systems that were still at least partially active, as well as Serpentis agents who were not exactly expected to share research in the spirit of scientific collaboration, it was clear that going in on my own may not have been the smartest idea I’ve ever had. If I wanted a chance to actually explore the site and not simply try to stay alive for a few moments, I was going to need some help. Thankfully, as with most things in New Eden, where there’s a will, there’s a way.

A Yan Jung data cache sits amongst various asteroids that were apparently purposefully arranged by the Yan Jung.

I was able to make my way into the site through the help of some fellow friendly capsuleers. Members of the corporation Vicious Industries, in a small fleet of the fellow capsuleers Mizz Vicious and Toyaoka Katsuo, graciously allowed me to tag along as they searched the site for valuables. Since I needed help, and didn’t have the necessary passkey to get into the locked areas of the site, I was more than happy to take up their offer to tag along. It was a bit unusual for me, who was much more used to working on my own, to be working, and relying on, people beyond my own crew. Still, all things considered, I was downright lucky to be allowed to tag along, especially since I had never met them before. They did seem a little hesitant initially, but once I showed them some of my research, they were happy to let me tag along. 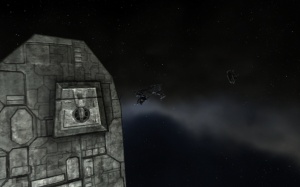 Mizz Vicious keeps an eye on the area while a Yan Jung Impaired Monument floats in the foreground.

With my passage into the site and protection assured, it was time to turn my attention to the site itself. The site itself consists of three deadspace areas tied together by acceleration gates. The first room was fairly unimpressive, consisting solely of the Serpentis picket of the site. Thankfully, they didn’t feel compelled to put a massive force in the initial room. We were easily able to deal with the frigates and occasional cruiser in that first room. After that, we made our way to the second room. This room consisted of Yan Jung defensive systems that were still, even some 10,000 years later, at least partially operational. It was impressive to say the least. The defensive grid consisted mostly of missile launchers and gun batteries. It was remarkable that these structures appeared fairly similar to the modern day. There was also a number of older structures that Aura identified simply as “gargoyles.” The structures appeared inoperative, and something told me that I should be happy about that fact. 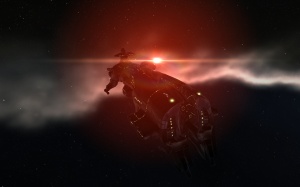 One of the Serpentis archeology ships, conveniently located in a battleship class hull.

We made our way to the very heart of the relics site. Here, the Serpentis were back, in force. Two battleships, and a small fleet of cruisers and frigates zoomed around, protecting the Serpentis’s finds from bumbling interlopers like ourselves. Thankfully, my fellow capsuleers handled themselves with aplomb and quickly dispatched the defending force. The force also appeared to consist of Serpentis’s exploration fleet as well. The debris from the battleships made it clear that there was a significant amount of scientific equipment aboard. It seems weird to me that a bunch of pirates would be concerned with scientific endeavors, but I had to remind myself that the Serpentis Corporation had a significant R&D division. Once these ships were dispatched, it was time to move on to what, precisely, they were studying. 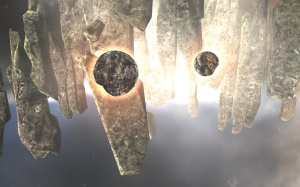 A close up of the center of the ruins.

The archeological site itself wasn’t in quite as good of shape as the previous deadspace area. Unlike the still semi-functional defensive grid, most of this site appeared to be in tatters. The site itself appears to center around two strange, glowing orbs. Given that similar relics can be found in Friggi, near the heart of the former Talocan empire, it made me suspect that perhaps the two empires were tied closer together than may have been suspected. Unfortunately, without knowing the significance or function of the orbs, it was hard to make many more conclusions. That they were of central importance to the Yan Jung seems evident though. The surrounding space is littered with battered and impaired monuments, all distributed equally around the central orbs. 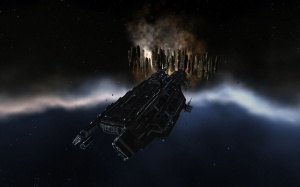 More directly noticeable were the deliberately arranged asteroids around the orbs. The stones were roughly hewn, but definitely taller than wide. Despite the rather haphazard initial appearance of the stone arrangements, it soon became clear after a bit of analysis that there were, in fact, two overlapping stone circles, one centered around each orb. This only reinforced the central importance of whatever those orbs were. But what were they for? Why put data caches AND monuments around them? Why guard this site with such an advanced  security system when the site itself, with rough-hewn stones that are only imprecisely arranged, is decidedly low tech? What was the connection with other, similar sites? I know that there are research projects that are attempting to answer these very questions… I just wish I was able to provide more answers.

Another part of the defensive systems.

Eventually, I figured I had gathered as much information as I was going to, and my fellow capsuleers were also done with the site. It was also clear that the Serpentis were regrouping to make another push to establish control of the site. Realistically speaking, the Federation could fairly quickly establish control to open up the site to more legitimate scientific research. Why the Federation refuses to assert its sovereignty over the area is yet another part of the mystery surrounding this entire site. The Yan Jung clearly are not as directly relevant to us these days as, say, the Sleepers, and some might even argue that the interest in the Yan Jung at this point are merely academic. Still, anything that can help us understand who we are and where we come from can only help us, if only by reminding ourselves that we were not the first ones to touch the stars.

This entry was posted on September 18, 2011 by mark726. It was filed under Hi Sec Sights and was tagged with Sinq Laison.