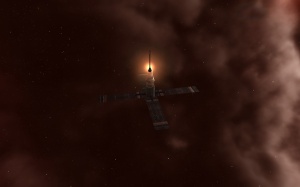 This beacon has only recently appeared in Charmerout

In my line of work, it’s rare to find something that’s actually new. Oh, there are plenty of sites that are new to me, of course (and I hope to keep finding new ones for a long, long time), but rarely are there sites that are absolutely new. When they are, they’re normally found in sites of catastrophic destruction, either in the scenes of battle or attacks against innocent civilians. Because these are the things that we humans feel the need to demarcate in some way. These are the things we generally feel a need to remember, lest we forget and have history repeat itself yet again. It’s an entirely understandable and cathartic way, uniquely human in many respects, to remind ourselves of who we are, and where we come from. Of course when you’re a traveler hoping to catalog the sites that humans have deemed important, for one reason or another, the constant reminders of death and destruction can be a bit… sobering, to say the least. I enjoy my job and the adventures that it allows me, but it can still take a lot out of someone, even someone as immortal as me. 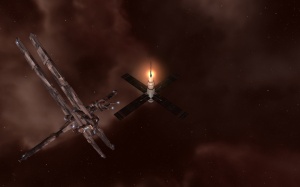 Professor Science slowly approaches the beacon to see what it can discover.

As such, when I came across information suggesting that there was a newly designated landmark in Charmerout, and more importantly, wasn’t directly related to death and/or destruction, I knew I needed to get out there immediately. I couldn’t immediately find information of just how new the beacon marking the aptly named “Mysterious Beacon” has been present in New Eden (and if anyone does have that information, I would much appreciate you passing it on), but my instincts told me that it was in some way connected to the also relatively new shuttle that was discovered in Geztic. That Charmerout isn’t a spectral class A0 star (a notable spectral class as all systems that suffered “main sequence anomaly” during the incident that correlates to the opening of the wormholes and creation of shattered planets were of class A0. Geztic is similarly a A0 star) only adds to that mystery. 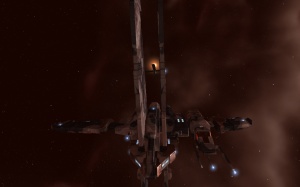 I come out of warp not exactly sure what I should be expecting. Just in front of my ship sits the standard location beacon that can be found in just about every site around the Cluster. It’s a rather drab affair, but serves its purpose of promoting that Something of Interest exists at the beacon’s location. I reach out my scanners around the area to see what that Something of Interest was in the case to find… another beacon. An unbidden “D’oh!” flashed through my mind. At first glance, the beacon seemed nothing out of the ordinary. Indeed, it was the exact same design as the one sitting about 15 kilometers distant, that Professor Science initially warped to. The only odd thing was that, unlike the initial beacon, the new Mysterious One wasn’t transmitting on any frequencies my ship normally monitored. Without the other beacon there, it would have been all but invisible over long range scans. Indeed, even my Sisters of Eve modified sensor probes couldn’t detect the beacon even when sitting right next to it. 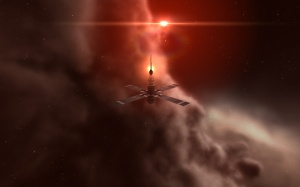 Distant starlight glints off of the panels of the beacon.

However, things are not always as they seem. Aura’s initial reaction to this beacon as I drop out of warp is telling:

What is this ancient probe doing all the way out here?

There is no outward way to know that this was an ancient probe. Indeed, it looks like (just as the original warp-to beacon) any other beacon that could have rolled off of the assembly line yesterday. There was not a hint of age to the outward appearance. Detailed sensor scans also provided some more clues. As Aura summarized:

Despite its familiar construction, this ancient probe is made from materials and electronics unlike anything you’ve ever seen in New Eden. It floats silently through space, seemingly dormant.

So now we have a beacon of untold age that is constructed of materials that even Aura can’t identify. The beacon was quickly living up to its name. But that was not quite all. As I approached within 5 kilometers of the beacon, my comm system unexpectedly became active:

The probe establishes a remote communications channel with your ship, then transmits a single ‘beep’ noise.

It was almost as if a ping that networks use to determine if the computer is active, responding, and the computer the program is looking for. Somehow, I doubted I was. 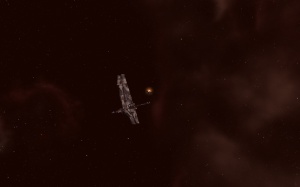 The beacon is substantially smaller than even a Buzzard class ship.

After that curious interaction with the beacon, I subjected it to every type of test I could think of. I used my analyzer, codebreaker, even my salvager. I made the trip back home to grab my Echelon-class ship, Cryptos, to see if it responded to the specially crafted Purloined Codebreaker. Mindful of reactions that the shuttle in Geztic showed, I attempted to use electronic counter measures on the beacon as well: again to no effect. Outside of the initial “beep”, there was absolutely no sign of life (electronic or otherwise) that I could detect. Its silence was infuriating. Eventually, however, I had to give up (just about the only test I had left was of the violent variety, and I wasn’t quite prepared to take that step). As I warped off, I wondered what the beacon was supposed to mark. There was nothing of note surrounding the probe. And perhaps more ominously, who, precisely, was the beacon supposed to alert?

This entry was posted on September 10, 2011 by mark726. It was filed under Hi Sec Sights and was tagged with Essence.