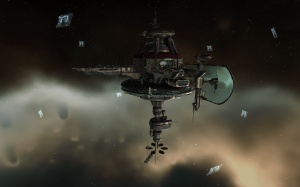 The office workers at the Roden Center apparently do not suffer for lack of updated news.

As a full-throated supporter of the Gallente democratic tradition, part of me has always been uncomfortable with such a well known corporate mogul winning the Presidency. President Roden has a long history not in politics, but in the so-called military-industrial complex. Roden Shipyards is a major contractor to the Federation Navy. While their small-craft division is well known in the commercial sector, the President has made the vast part of his fortunes from manufacturing machines of war. The argument is easy to make (and I’m sure it has been) that, in fact, the President has a vested interest in making war to ensure the continued prosperity of his company. Given all that doom and gloom conspiracy theory making, one might assume that I’m not a fan of President Roden. On the contrary, I’ve been happy with the President so far. The war we’re admittedly in wasn’t started by us, but was rather brought upon us by an attack by the Caldari when our defenses were down. I can’t blame President Roden for that (though I realize certain conspiracy theorists would disagree with me). 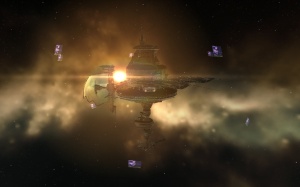 What I CAN blame President Roden on, however, is the plethora of Roden Shipyard facilities that seem to pop up throughout the Federation. At times, I feel like every other system I visit has some form of Roden facility, be it orbital facility, deep space military shipyards, or some other administrative center just floating in the middle of nowhere, why not. I thought I had discovered, by now, the various forms of the somewhat cookie-cutter Roden facilities. That’s why I was particularly surprised to discover that I had apparently missed one in my various wanderings through Gallente space. Merely called the Roden Center, the rather banal name drew my attention as I was warping through the system. Intrigued to see precisely what this new complex did, once I dropped out of warp at my original destination, I quickly turned around and warped back out from the gate. As I approached, I was met with a standard greeting:

Welcome to the Roden Center!

Thank you for visiting the Roden Center, where the Federation’s past and future collide! 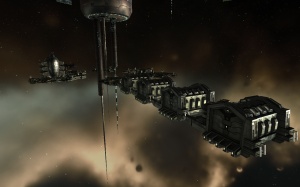 Some of the cargo containers near the Center

Notwithstanding their somewhat hackneyed motto, the site itself seemed to be a bustling spaceport in its own right. Ships flitted around the area, while massive cargo vessels were docked, ready to load or unload their cargo. Most striking about the complex, however, was the dozen news billboards surrounding the station. Apparently, Roden valued well-informed employees, as each of those billboards were tuned into the CONCORD Information Network that could be found at every stargate. I was immediately reminded of yet another recent news report that said that people were so overwhelmed with information these days that their attention spans were shrinking drastically. I don’t remember if there was anything else in the report, since as I was reading the story I was distracted by a new message and never got back to it, but I’m sure it was something along those lines. 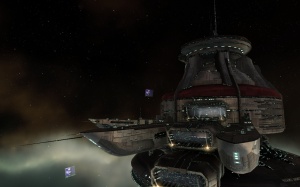 A closeup of the upper part of Roden Center.

I had to admit that I was tempted to stop at the gift shop. I was always a fan of cheesy gifts, even if I never actually bought any of them. I didn’t have a chance to stay, however. Being involved in other pursuits currently meant that I had limited time today. Besides, I was hoping that I might see some pixies. As I warped to the stargate though, I continued my reflection on the current Federation President. He certainly was not my first pick when I saw the presidential field, but he’s weathered the recent crises as well as anyone could expect. For a military-industrial hack, maybe there was hope yet. After all,  the People have spoken.

This entry was posted on August 19, 2011 by mark726. It was filed under Hi Sec Sights and was tagged with Sinq Laison.