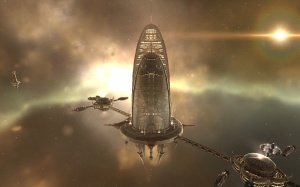 With the recent Sansha invasions, maintaining control of high security space has become more important than other. Unfortunately, it seems that most of the major powers equate “control” with “bureaucracy.” The Amarr Empire was no different. Indeed, one of the things that I’ve noticed during my time in the Empire, especially in the Araz Constellation, is the sheer number of complexes dedicated to maintaining bureaucratic control over the Empire. I would have expected bureaucratic excellence to be more of the Caldari State’s domain over the Empire, but as the largest of the major powers, I suppose their need for administrative control was greater. Various exhibits of Amarr administrative control could be found throughout the Empire, but one of the more explicit examples of this could be found in Zimse. As I warped to the site, Aura pulled up some information for me: 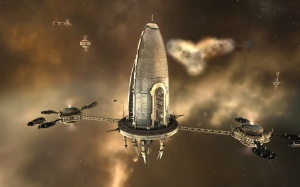 Within each constellation controlled by the Amarr Emperor, an Imperial Administration complex is established. Both acting as a point of economic and political control as well as a military tactical facility should the region come under attack. With the current instability of Araz. This Imperial Complex has become a strong military base of operations. 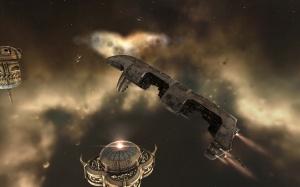 Part of the defensive fleet stationed at the Complex

I wasn’t entirely sure what about this site warranted inclusion in CONCORD’s special site’s database. It actually seemed to be a fairly straightforward site: there was a central administrative complex surrounded by a variety of supporting structures. I could only imagine the amount of paperwork that the Office had to keep track of. Despite Amarrian ability to make almost anything look graceful, it seemed one of the constants of universe was that bureaucratic structures had to be fairly bland. Even the traditional Amarr gold that flared brilliantly in the Zimse sun wasn’t enough to make the entire site feel, well, boring. There just wasn’t much going on. I could almost hear the quiet typing of those old-fashioned typewriters slaving away within the complex. 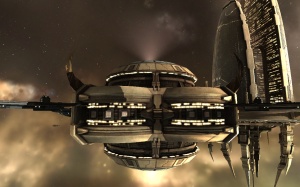 One of the supporting structures for the complex

Flitting about amongst the central structure and outlying buildings flew a number of shuttles and defensive vessels. Clearly this was a site of some importance, at least given the battleship squadron that appeared assigned to the site. If Aura’s information was correct, the apparent importance of the site warranted some protection. Still, I had difficulty differentiating this site’s purpose from things like Caor Korduin and the Carchatur Complex. I suppose that was another universal feature of bureaucracy: needless redundancy. If I had ever had any doubt about the existence of the bloated Amarr bureaucracy, I need look no farther than the Araz constellation. 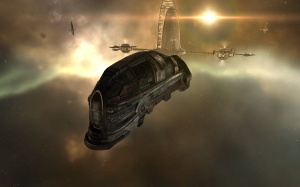 One of the supporting vessels stationed nearby

After a few minutes at the Complex, I started getting communiques requesting I fill out form AS-432, as well as Schedule B. I took that as my cue to leave. I had enough paperwork from dealing with CONCORD and various related agencies. I had no desire to add that. With that, I set course out of the system, not giving this prime example of bureaucratic morass a second thought.

This entry was posted on February 19, 2011 by mark726. It was filed under Hi Sec Sights and was tagged with Kador.