A Sansha cruiser blocks out the sun.

The following is a Scope Special Report.

YULAI, Sanctum- Yulai stood aghast this week as, just days following an invasion into the heart of CONCORD-controlled space, five constellations went dark as the Sansha Nation initiated simultaneous incursions in what is believed to be the single largest offensive in the history of New Eden. Despite the shutdown of official means of communications, stories quickly spread as capsuleers, crews, and civilian vessels fled the scenes, causing mass chaos. Even CONCORD-patrolled space was not immune from the Nation’s reach, as Algintal, a constellation in the Gallente Federation, fell completely dark for several minutes before officials were able to re-establish contact through emergency channels. 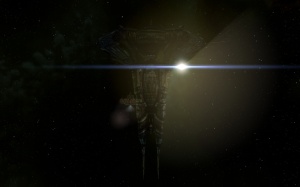 The Sansha Nation has shown remarkable proficiency in establishing bases of operation soon after deployment.

CONCORD officials reacted swiftly to the news. After a hastily convened Inner Circle closed session, CONCORD quickly announced measures the peacekeeping force has taken, as well as new legislation authorizing capsuleer response to these so-called incursions. The quick turnaround time on the legislation, as well as immediate upgrades to capsuleer software in their ships, have lead some to believe that there were those in CONCORD who have been expecting this to come. Indeed, some Inner Circle observers have referred to the so-called “Operation Ishaeka” as evidence that CONCORD has had information regarding the Sansha movements for some time, and yet has taken little to no action before now. These observers have referenced CONCORD’s inability (or, at least to some observers, CONCORD’s unwillingness) to respond to prior Sansha invasions, even when concentrated to only one system, as proof of some kind of détente between Yulai and the Nation, while others argue that this simply shows how capsuleer forces are better able to handle the situation.

Fleets of capsuleer-piloted vessels have been quick to respond to Sansha incursions… so far.

Meanwhile, reports on the situation within Sansha-controlled space have been few and far between. Federation officials, speaking on condition of anonymity as they are unauthorized to speak for the Federation, expressed surprise as the first reports from Sansha-affected space came in to Luminaire. Said one: “They’ve managed to infiltrate everything. All the various financial and administrative control systems we thought were secure have proven not to be. I don’t know where they managed to develop their hacking software, but its years ahead of anything either the Federation or the other empires have been able to produce.” 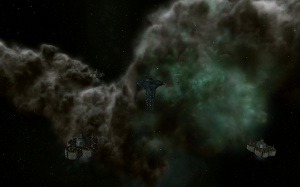 Initial reports indicate that after Nation forces move into a constellation, they quickly overwhelm many software safeguards in place around financial systems and protective measures. Gallente intelligence reports show that these Sansha forces are stronger than many other non-capsuleer forces that capsuleer forces have encountered before. Initial threat assessments show that even the weakest sites should not be handled by less than five to ten capsuleers. Reports also refer to money being diverted from CONCORD accounts traditionally paid for bounties on known criminals to Sansha bank accounts instead of capsuleer accounts, demonstrating an ability to hack into Secure Commerce Commission accounts. Similarly, the Sansha have been able to quickly establish cyno-jammers in null and low security systems, preventing capital ships from jumping in to join the fight. Early reports even indicate an ability to hamper, though not destroy, capsuleer-piloted vessels by reducing armor and shield resistances, as well as damage output. Strangely, these setbacks appear to affect at least some Sansha ships themselves, which some have suggested are indicative that the exploits that the Sansha are using are endemic to all capsuleer technology, and cannot be turned on and off at will by any particular ship.

CONCORD-released imagery of a Sansha logistics base

Despite early CONCORD reaction to the recent incursions, many have criticized what they see as non-action by the Directive Enforcement Division, the enforcement arm of CONCORD responsible for keeping the peace beyond planetary atmospheres. CONCORD spokesmen were quick to respond to the accusations. Said DED spokeswoman Ruera Penthe, “CONCORD is working closely with capsuleer forces. The DED has made the determination that capsuleer forces are better able to respond to fluid situations, while DED ships maintain their customary peacekeeping roles. However, recent legislation by the Inner Circle has authorized CONCORD to hand out ISK to capsuleers and open private CONCORD materiel stores to capsuleers who have worked with us to resist the Sansha threat. We thank all pilots for what they’ve done so far to ensure the safety and security of all citizens of New Eden, and we look forward to cooperating and planning offensive and defensive operations in the future.”

Capsuleers have responded to the Incursions with predictably mixed results.

There are at least some indications, however, that CONCORD’s trust in the capsuleer community is misplaced. Since the legislation authorizing capsuleer response to the Sansha incursions, reports have come to light that while many capsuleers have taken up arms against the Sansha, a number of capsuleer corporations and individuals are either sympathetic to Nation causes, or at least excited for the prospect of wreaking havoc. Some, mostly in the null security space beyond CONCORD jurisdiction, appear to not care about the incursions at all and are, so far, ignoring them, letting Nation forces fulfill their plans without resistance. Reports of outright defense of Sansha ships by capsuleer supporters are few and far between. However, there have been a number of reports of capsuleers joining fleets with so-called “logistics ships” (a capsuleer term to refer to ships that are able to support either shields or armor repairers to help other vessels) only to find that another logistics ship that they were trying to help will violate CONCORD rules, triggering CONCORD’s automatic threat elimination response. These responses will destroy not just the offender’s ship, but also those who were repairing the defender, meaning that even well-intentioned and dedicated capsuleers to lose their vessels. Questioned on this apparent defect, Penthe responded: “Since these incursions have begun, DED has begun re-evaluating it’s threat detection and response procedures in response to capsuleer concerns. However, due to the essential nature of these software changes, DED is unwilling to give any kind of time frame on when improved software may be deployed to prevent this situation in the future. In the meantime, DED strongly advises all capsuleers to only join fleets with others you know and trust.” Furthermore, in order to prompt capsuleer participation, DED has released the standard message sent to all capsuleers when entering an incursion constellation, giving some insights into CONCORD’s defensive strategy:

Attention all capsuleers: Sansha’s Nation forces have staged an incursion of the [] constellation. Local empire navies are standing by to protect against planetary abductions. Reinforcements are required to actively remove the threat.

CONCORD has created this channel to aid in the organization of capsuleer fleets willing to fight the Sansha. All pilots who offer assistance will be rewarded. 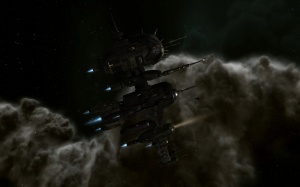 While this is by far the largest coordinated Sansha incursion, this is not the first time Sansha Kuvakei or his forces have invaded the cluster. The CONCORD Directive Intelligence Agency has released background information regarding Sansha Kuvakei and his history. Kuvakei’s motives are as of yet unclear, but ever since his return last year, his ire appears principally directed at the capsuleer community. However, in order to achieve his goals, he has been known to abduct planetary citizens. To date, such abductions number into the millions, despite heavy capsuleer resistance to any and all Sansha incursions even prior to the current breakout of hostilities. In recent weeks, however, Nation tactics appeared to change. In last weekend’s attack on Yulai, most Sansha forces appeared to ignore the inhabited planets in favor extracting plasma from Yulai itself. The Nation’s intentions with the solar plasma is as of yet unknown.

In the meantime, CONCORD advises all spacefaring and planet-bound citizens to be aware of their surroundings. CONCORD has already deployed new software to all capsuleer vessels to alert them when entering Sansha-controlled space, while planet-bound citizens are advised to keep watching newsfeeds to determine if a Sansha incursion is occurring nearby. Penthe, the DED spokeswoman appeared to acknowledge CONCORD’s limited ability to respond to the Nation threat, “All we can do is give out the information and alert as many people as possible. Watch your neocoms. Know where you’re going, and where the Sansha are currently active. The rest, unfortunately, is up to the citizens of the cluster.”

This has been a Scope Special Report.

This entry was posted on January 31, 2011 by mark726. It was filed under Hi Sec Sights, Low Sec Sights, miscellaneous, Null Sec Sights .