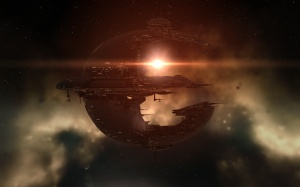 The massive station stands guard for the Imperial complex

It’s a time of upheaval. Actually, come to think of it, there always seems to be some kind of upheaval going on in New Eden, either in capsuleer politics, Empire politics, or a little of both. New Eden is and always has been a dynamic place, for better or for worse. But these days, not even the empires are safe. Rumors are growing of a bigger threat than anything that the Empires have faced in a long time, and it’s not clear that even CONCORD can withstand a coming onslaught. Clearly, the Empires were going to crack down. Now, Amarr has never exactly been a bastion of liberty when it comes to security issues vs. personal rights, but with “enhanced security measures” on the rise across all the empires, therewas one item on my checklist of travel sites I wanted to see before it got cut off completely: an Imperial Palace Complex. Fortunately, there was one in Nidupad, so I loaded up the Professor and set course. I pulled up some info on GalNet, but it quickly became clear that the Empire wasn’t exactly on top of keeping its pages current:

Legacy makes its way near the massive Citadel complex

Emperor Family has many palaces inside the Amarr territories. One such palace is in Nidupad, looking out over the entire Kador region. Palace entrances are traditionally heavily guarded, this palace being no exception. Entry into the palace grounds is strictly forbidden to anyone but the royal family and its servants.

A closeup of the massive battlestation

I’m not sure how Empress Sarum would feel if she knew about this, but I wasn’t going to be the one to bring the gender issue in that text to her attention. In any case, I made it to Nidupad with little problem, and set a course directly for the entrance to the complex. As I came out of warp, my jaw dropped as a massive battlestation came into view. As a capsuleer, of course, I was used to massive station structures, but I wasn’t used to them being so heavily armed. Legacy‘s sensors were reading row upon row of laser turrets ready to fire at a moment’s notice. And the armor on the Citadel was thick enough to withstand a direct doomsday device hit or 7.  Certainly not something to be trifled with, but I suppose I would expect nothing less for the entrance to an Imperial Palace.

Beyond the massive Citadel structure, a number of Imperial Guard ships could be seen nearby, adding yet more firepower to anyone trying to breach the Palace deadspace. The ships seemed to be guarding the nearby reception facilities, which were no doubt filled with a number of Palace bureaucrats and advisors. One of the stations hailed me soon after I arrived to ask what business I had at the complex, and I simply replied that I was looking around. They let me look around, but they kept a wary eye on me. One of these days, I was going to have to look into what was necessary to get diplomatic immunity among the Empires and capsuleer alliances to prevent this kind of distrust, but that was for another day.

Various shuttles and other small craft can be seen flitting about the complex, between the citadel, station, and even deeper into the Palace complex

I casually made my way towards the nearby acceleration gate: the only way to get deeper into the palace complex. When I got within activation distance, I sent the standard hail to the gate. It didn’t respond. Whether that was standard security protocol or a response to the Empress actually being at the palace, I had no idea. In any case, the palace reception stations immediately hailed me again to ask my business. After attempting to explain to them my purpose, they seemed no less pleased with me, so I took their response as a hint to get out. Good standings with the Empire or not, I wasn’t about to risk the wrath of the Citadel and its battleships. I quickly aligned to the nearest gate out of the system, but took one last look at the Citadel. Despite the bristling weapons, it had the usual Amarr beauty and grace that I’ve become so accustomed to. If the Citadel was this gorgeous, then the Palace itself must truly be a site to behold. And with that, I warped off into the night.

This entry was posted on November 22, 2010 by mark726. It was filed under Hi Sec Sights and was tagged with Kador.