An overview of the excavation site.

They say that all good things come to an end. Sad as it may be, though, the universe continues. Hydrogen keeps fusing into helium. Planets keep spinning. Even when it seems as if your entire society is collapsing down on top of you, life goes on. As I’m sure it felt to those humans who survived the collapse of the EVE Gate. I couldn’t even begin to imagine what that must have been like. to know that your homeworld is a wormhole jump away, then seeing it collapse in the blink of an eye, and left only with the remote and sparse lands of New Eden. Of course, these days New Eden was far from sparse or remote, but back then, when we were first colonizing these worlds, it was a true wildland. And to be cut off from everything and everyone you knew… well, it’s no wonder that most colonies collapsed and perished. Including, I would surmise, the one whose ruins have been recently found in Otitoh. I ran across the dig site, and knew that I had to go see it for myself. En route, I perused the GalNet for some information:

The Devil’s Dig Site is single-handedly responsible for the great hubbub in the Okkelen constellation these last few years. If it wasn’t for the discovery of artifacts from an ancient human civilization dating back to when the EVE Gate was still open, the constellation would still be a desolate, dreary place totally ignored by all but a few bandits.

The State keeps a very watchful eye on the progress of the excavation.

Funny how these deep connections to the past drew out both the best and worst in us. The place was crawling with guards to ensure that no one ran off with anything important. Of course, since they were State naval ships, I suspected that if the Caldari found anything of real value, they’d “neglect” to mention it to the other powers (though I honestly couldn’t say that any of the other major powers wouldn’t do the same). Regardless, archeological excavations were clearly in full swing as I arrived at the dig site. I didn’t want to risk disturbing anything of value, and as such I stayed near the fringes of the excavation site. Of course, it’s much less likely that the Professor would harm something (unless I used her to ram the site or something), but as an amateur scientist, I felt it only respectful to keep my distance. 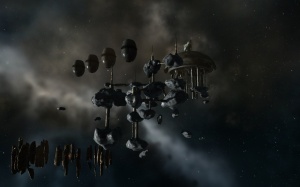 The site was a mixture of both old structures and new ones to support the science teams.

The first thing I noticed of the dig itself was that one of the structures looked oddly familiar. Since Friggi was only one jump over, I couldn’t help but think that the odd structure in that system was created by the same people who created the Dig Site. Why, then, this site warranted so much more attention than Friggi was beyond me. But something, clearly, had the archeologists excited. The research center, vats of chemicals, and sheer amount guards proved that much. Beyond the odd circle of stones, there also seemed to be some kind of temple structure. The lines were distinctly similar to Amarr temples, yet the Empire was fairly distant. Odd. 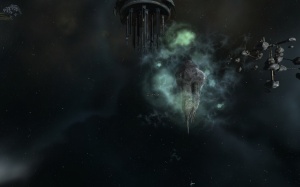 A few of the structures present at the dig site

The center of the complex seemed to be a large and potentially hollowed out asteroid. My scans of it were inconclusive, but I suspected that that was as much from Caldari dampeners as anything else. It certainly seemed imposing, floating amidst a small blueish cloud, dwarfing the Professor. Nearby, the scientists had set up an acceleration gate to get to another part of the site. Unfortunately, it was locked to me unless I possessed a certain kind of key. The guards didn’t look like they were particularly open to reason on this one, either.

This seemed to be the central lab and living quarters of the scientists.

I tried to take in the sheer temporal distance that separated me from the people who built this. Most estimates put an almost 16,000 year gulf between the collapse of the Gate and the present, a staggering amount of time for someone who measures their age in decades, not millennia. As sad as it is to think of what humanity missed by being set back so far by the collapse of the Gate, I couldn’t get myself to focus much on it. There were far more immediate mysteries that affected the here and now to worry about first. After all, life goes on.

This entry was posted on October 17, 2010 by mark726. It was filed under Hi Sec Sights and was tagged with The Forge.