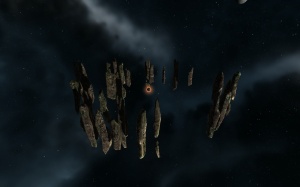 Certainly one of the stranger springs that I've seen in my days.

Admittedly, it’s been a while since I’ve been planetside. Even during my breaks off-ship, I tend to hole up in a station rather than shuttling to the nearest inhabited world. Something about wide open spaces when I’m protected by mere fabric makes me… nervous. Paranoid, really. Staying inside the enclosed stations is more for my state of mind than anything else. So it’s been a while since I’ve really felt the earth beneath my feet, or watched a sunset. But that’s not to say that I’ve forgotten what those things are. I know what fields are, and I know what waterfalls are. And I know what springs are. Or at least, so I thought. Then I flew into Friggi. 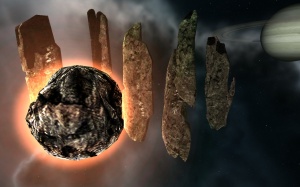 The object in the middle of the site. Friggi VII hangs in the distance.

I was understandably intrigued that CONCORD had marked something labeled as “Clear Water Spring.” I quickly made my way over, not entirely sure what to expect. Maybe some kind of comet to supply the local stations with water? Some kind of magical water-spouting device? Interestingly, despite quite a bit of searching on the GalNet, I wasn’t able to discover all that much information on the area. It seemed that, despite a few hints, I would be flying into the unknown here. With that, I angled the Professor towards the site, and the Buzzard slipped into warp. 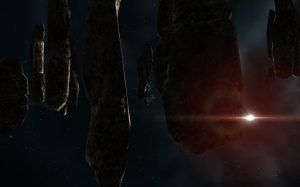 The Professor flies among the strangely arranged rubble

What I found there wasn’t what I was expecting. I was, at the very least, expecting something… a little wetter. Instead, what I found were a bunch of monolithic asteroids arranged curiously. They seemed to form a fence around a central, glowing sphere or pod. The Professor’s sensors couldn’t make heads or tails of it. I couldn’t even tell what was causing it to glow. The asteroids surrounding the slowly pulsing sphere were all very tall and thin, but seemingly pretty normal. In fact, I wouldn’t be surprised if they had all been cleaved from the same larger asteroid. Nothing worth mining, of course. 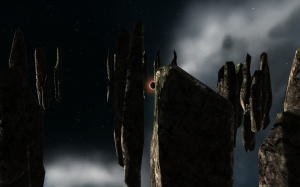 The strange central sphere seen through the field of asteroids.

A few ships sat nearby. I tried to engage them in conversation, but they seemed to have some other things on their minds. Kept offering me jobs, regardless of what I asked them. You know, typical Caldari: always looking out for isk over anything else. After trying a few times, I gave up and closed the channels with the two apparent agents. With no prospect of figuring out even why this area was called “Clear Water Spring,” I had to place this site in my “ongoing mysteries” stack. That stack was significantly higher than my “solved mysteries” stack, alas. As I vectored off, I considered calling in a few favors. Maybe some time planetside wouldn’t be the worst thing in the world. At the very least, it would let me see an actual spring…

This entry was posted on October 2, 2010 by mark726. It was filed under Hi Sec Sights and was tagged with The Forge.