It had been quite a less than stellar maiden voyage. Finally fed up with losing the Professor again and again, I bit the bullet and invested into the new-fangled Tech 3 ship, the Tengu. Properly specced, the Tengu had the ability both to fit a covert operations cloaking device, and the ability to fly through warp interdiction bubbles. These bubbles have long been the bane of my existence while flying through non-empire controlled space, and the ability to side-step them entirely interested me immensely. Since their introduction a year ago, their prices have dropped steadily, and I was able to reasonably fit one for a little over 400 million isk. Certainly still the most expensive ship I have owned to date by far, but much less than what I would have had to pay even 6 months ago. The strength of this setup was immediately apparent, and the newly christened Scientia (a more regal, and appropriate name) breezed through numerous gate camps.

G5ED-Y glows in the background as Scientia approaches

Unfortunately, my fellow fleetmates were less than lucky. As a way to help get to know some other Coalition members, I had offered to serve as a tour guide to anyone interested. Three others ultimately ended up joining me: Casiella Truza, Rettic, and Dallen Ward. The other three were in covert operations frigates of various classes. Normally, that would be fine for what I had planned. Unfortunately, our small fleet quickly took a turn for the worst. Our first jump into alliance-controlled space took us straight into a gate camp from Morsus Mihi. Three covops ships and a Tengu quickly attracted their attention. Scientia thankfully got through without a scratch, but my other fleetmates were less than lucky. One by one, each of my fellow pilots were caught in the jaws of the various gate camps and warp interdiction bubbles, even as I used Scientia‘s advanced technology to scout ahead. Just 6 jumps in to Morsus Mihi controlled space, I found myself entirely alone. Unfortunately, Rettic and Dallen both were podded (though both quickly contacted me after being rather forcibly revived in clone stations to pass along that they were ok), and Casiella lost her ship. She managed to avoid getting podded herself by apparently deft manuevering on her part, and eventually managed to even extricate herself back into the safety of empire space. 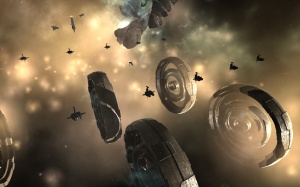 That adventure ultimately left me alone to finish my trek to our destination. Thankfully, soon after Casiella fell, they left me alone, apparently aware that they weren’t going to catch a tech 3 Tengu. Fifteen minutes later, I found myself completely alone in the system of G5ED-Y. I had heard rumors that the Caldari had set up an extensive base in the system. Rumor had it that they had discovered something quite significant, even if my sources couldn’t tell me what that “something” was. Obviously, I was intrigued to investigate. As I entered the system, Aura presented the results of the search query I had entered when the fleet first set out. The results weren’t much, but:

The Caldari State have found something significant in G5ED-Y. The State military has set up a huge base of operations in that system, and its presence there is thick as sour milk. The Guristas on the other hand are extremely curious as to what their arch nemesis has discovered, and have set up many bases in the surrounding systems to oversee reconnaissance missions into G5ED-Y. A division from the Serpentis has also been sent to the constellation on behalf of the Smuggler Cartel, led by the infamous Black Jack.

A temperate planet floats near the Sergeant's hideout.

The site itself was rather impressive. I took Scientia in from a few kilometers distance to investigate. Nearby, Sergeant Hakiro kept a watchful eye from his Caracal. I suspected that it was only my decent reputation with the State that kept me from being blown out of the stars. I sent a hail towards him, and he sent a very curt welcome back to me that implied that I was anything but. I took that as a sign to keep my explorations brief. Still, what I saw was quite impressive. Rows upon rows of what I presumed to be antennae floated among the support structures for the base. Nearby, a cracked asteroid floated, its useful minerals mined out to help produce the structures for the base. A few navy vessels patrolled the outpost, ever-vigilant to the many threats found beyond empire-controlled space.

Attempts to learn exactly what the State had found out here, exactly what warranted this substantial projection of force so far from the State’s boundaries, were unsuccessful. the Navy ships did not respond to my hails, and all scans were inconclusive to anything found either at the base or the nearby temperate planet. Whatever the State had managed to dig up this far out, they were hiding it extremely well. Even Scientia‘s advanced sensor package did little to reveal any new secrets. Something told me that if I had a better reputation with the State that Hakiro would be more open with me, but as it stood now, it would simply have to remain a mystery.

While the start of the journey was not as safe as I might have hoped, I had to admit that (for as long as they lasted, at least) it was nice having companions on these journeys. I certainly felt guilty that I had led them to their temporary demises, but I also knew that my friends didn’t blame me for it. At the very least, though, our trip ensured that the next time that I took a fleet with me on a trip, I wouldn’t be the only one in a tech 3 ship.

This entry was posted on July 11, 2010 by mark726. It was filed under Null Sec Sights and was tagged with Vale of the Silent.