I approached the station from it's undamaged side

Capsuleers are many things. Throughout my travels, I’ve met some very noble souls, but I’ve also met some very wicked ones. I find it hard to fathom exactly how much control we ultimately wield over the affairs of not just a planet or a system, but a veritable galaxy. The course of empires can be changed at the mere blink of an eye of a capsuleer. Remarkably, though, I’ve always found it heartening that, for the most part, we keep our affairs to ourselves. It’s rare indeed that civilians get caught in the crossfire of our great wars, and when they do, it’s almost always because they made a choice to be a crew on our ships. Indeed, it’s really only when I see the glittering lights of a colonized world that I think about how many lives go, for the most part, untouched by us. 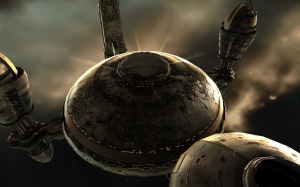 It was for that reason and more that I read about the events at Pashanai with sadness. I had headed planetside two days before to handle some personal business, and was not able to return to my pod for another three, but the moment my pod secured itself in the Professor, I knew exactly where I was going. It was a strange, but pervasively human desire to see the results of disasters. Part of you can’t bear to think of the lives affected or destroyed, and yet the rest of your can’t even think of looking away, if only to see what happens next. I’ve seen it time and time again, even before I gained my Pilot’s license. That strange desire was pulling me once again, so off I went to Pashanai.

Pashanai III hangs in the background.

By the time I had returned to my pod, of course, most of the details of the attack had played out. At roughly 11:00 Eve Standard Time, an explosion ripped through the hull of the Ministry of War station in Pashanai. The Amarr rapidly mobilized on the Minmatar border, especially after it was learned that a member of the Theology Council, the Amarrian high court, was on-board the station. Indeed, up until 20 minutes before the explosion, Empress Jamyl Sarum was scheduled to be on the station at the time of the explosion. Over 5,500 people perished that day. The Amarrians were understandably upset over the attack, but at least some commentators jumped on the Amarrian response as too aggressive. The Minmatar terrorist group Bloody Hands of Matar soon claimed responsibility for the attack, and they were quickly and rightfully denounced by the Minmatar and Gallente governments. However, at least some ties have been uncovered between the BHoM and the infamous Ushra’Khan capsuleer alliance.

The Professor performs a fly-by over the damaged hull sections of the station.

It was with this background that I approached the station. Given my original warp-in angle, the station looked remarkably untouched, and I briefly wondered if the explosion had occurred in the heart of the station. As I circled the Professor around, however, the huge gash on the other side of the station quickly came into view. Almost half of the station’s dome was charred and burnt. These sections stood in stark contrast to the normally gleaming Amarrian hulls that I have grown so used to seeing. Tiny bits of debris still littered the area, though unlike the Caldari, the Amarr had at least managed to put the fires out by the time I arrived. 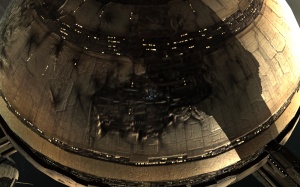 The Professor glides past a particularly damaged part of the station.

As I circled the station a few times, I couldn’t help but marvel at how just cheap life can appear. It’s often easy to forget about mortality when you’re a capsuleer. Instant cloning will do that to you. Still, that’s a luxury beyond most people’s wildest dreams, and it is a constant struggle to remind myself that just because I may wake up in a clone bay doesn’t mean that the hundreds of other people that serve on my ship will. And those on the station certainly didn’t have a chance to get to an escape pod, or know that they’d wake up mildly irritated in a new body. Capsuleer technologies are a wonderful gift, but it’s times like this that I wonder if it’s worth the loss of our humanity. Because if mortality isn’t the singular defining feature of our existence, what is? If losing our lives means nothing to us, how can we fathom what it means to those who don’t have our benefits?

With too many questions, and too few answers, I left the smoldering ruins behind.

This entry was posted on March 30, 2010 by mark726. It was filed under Hi Sec Sights and was tagged with Genesis.